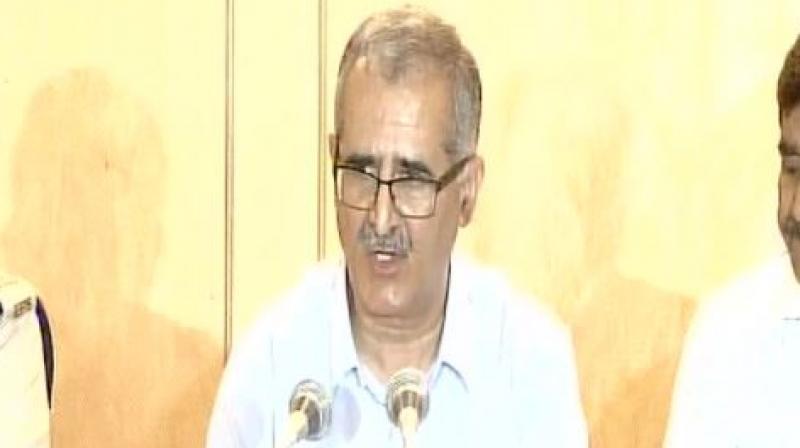 Haryana Chief Secretary D S Dhesi also denied any special treatment being given to the Dera chief in a Rohtak jail after being held guilty in a 15-year-old rape case by a CBI court in Panchkula on Friday. (Photo: ANI/Twitter)

He also denied any special treatment being given to the Dera chief in a Rohtak jail after being held guilty in a 15-year-old rape case by a CBI court in Panchkula on Friday.

"The moment he was arrested yesterday, his 'Z plus' security cover stood automatically withdrawn," Dhesi told a press conference here.

"He is being treated as an ordinary prisoner. It was reported that he was being on air conditioner, there is nothing like that. As far as food is concerned, he is served the same food which other prisoners have," he added.

Besides, the security personnel drawn from the Haryana Police, he was accompanied by his private commandos when he arrived in Panchkula in a carcade from Sirsa to appear before the court. After his conviction, he has been lodged in a jail at Sunaria in Rohtak.

"No special treatment is being given to him. He is being treated like any other ordinary prisoner. An ordinary prisoner sleeps on floor and he too is doing the same," the DGP (Jails) told reporters at a separate venue.

He said four jail officials have been deployed near his barrack to monitor his activities. When asked about the challenges the jail authorities may face due to presence of a high-profile prisoner, he said to keep him secure inside jail would no doubt be a challenge.

"That is why we have made an arrangement inside the jail to ensure that no other prisoner harms him. Outside the jail, we have requested the local administration to secure area and have adequate security arrangement," he said.

Asked about the number of visitors the Dera chief would be meeting him in the jail, Singh said every prisoner can give names of five persons whom he wants to meet, and he will also be allowed to meet them only like any other ordinary prisoners.

Paramilitary forces have been deployed in large numbers outside the Sunaria jail.

Meanwhile, Rohtak Deputy Commissioner Atul Kumar asked the people to maintain peace and not to believe rumours. He also said that their endeavour was to ensure that Rohtak district and Sunaria jail remains secure.

A CBI special court at Panchkula convicted the Dera chief on Friday. The court would pronounce the quantum of sentence on August 28.

Immediately after his conviction, followers of the Sirsa based Dera went on rampage and clashed with security personnel in which 31 people died while around 250 injured.