IPS officer Ashok Kumar has been put under suspension with immediate effect, an official order said. 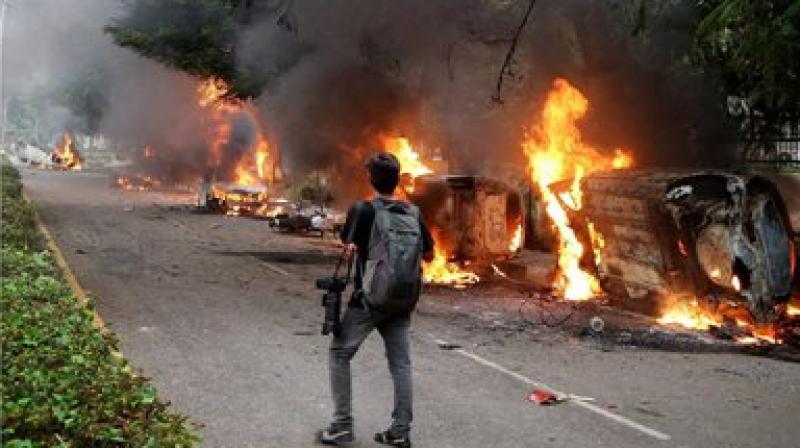 Chandigarh: The Deputy Commissioner of Police in Panchkula was suspended on Saturday by the Haryana government, a day after 36 people died in the district in violence triggered by the rape conviction of self-styled godman Gurmeet Ram Rahim Singh.

During the period of suspension, he will report to the office of DGP, Haryana, Panchkula, it said.

Official sources saied the senior police officer was blamed for failing to get prohibitory orders under Section 144 effectively implemented in Panchkula.

The Army has reached Sirsa, the headquarters of the Dera Sacha Sauda, as the sect’s chief Gurmeet Ram Rahim Singh awaits sentencing in a Rohtak jail for rape.

The Army anticipates more violence Monday, when the sentence will be given by a special CBI court that convicted Ram Rahim of the crime on Friday. Following the conviction Dera Sacha Sauda followers went on a rampage that resulted in the death of 31 people.

Sirsa sub-divisional magistrate Paramjit Singh Chahal said the Army has no orders yet to enter the Dera Sacha Sauda headquarters, even as defiant followers of self-styled godman Gurmeet Ram Rahim Singh stayed put at the campus.

The Army along with the police and paramilitary forces has put up barricades at entry points of the Dera Sacha Sauda premises.

Chahal said that a high-level meeting between the Army and the state authorities was underway this afternoon.

An estimated one lakh people, including women and children, were present in the sect headquarters.

The Army and district authorities have been appealing through loudspeakers, asking those inside to leave the premises. Fifteen Dera followers have been arrested since last night here, police said.

"We will not spare those who have taken the law in their hands. We will take strict action against then," Inespector General (Hisar) A S Dillo said outside the Dera headquarters.

Sources said the Army was last night provided with a map of the sprawling dera campus, which is spread over nearly 1,000 acres and is a township on its own, with schools, sports village, a hospital and a cinema hall.

Security forces remained on high alert on Saturday in Panchkula as an uneasy calm prevailed in the district, the epicentre of Friday's violence triggered by the rape conviction of self-styled godman Gurmeet Ram Rahim Singh.

The violence that claimed 36 lives has left locals in shock and anguish, with many questioning why authorities failed to assess and control the situation on time.

In Panchkula, 30 people died and over 269 were injured after the Dera Sacha Sauda followers went on a rampage on Friday. Over 60 police personnel including two IPS officers were also injured. Six people died in Sirsa, the headquarters of Ram Rahim’s sect Dera Sacha Sauda.

"The situation is tense, but under control now," a senior official said on Saturday.