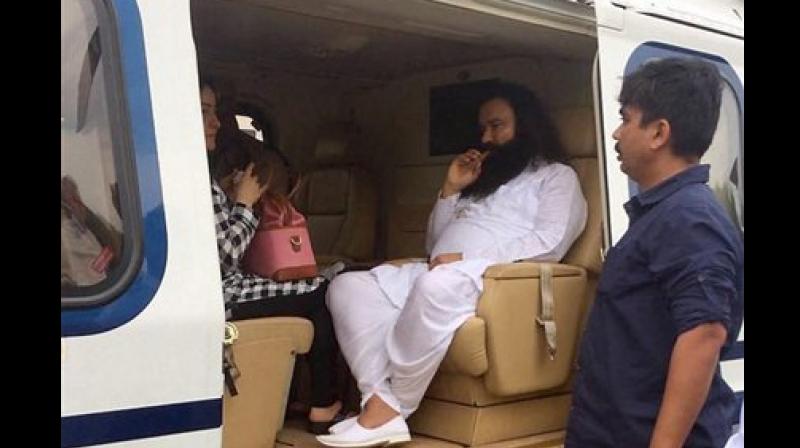 Dera Sacha Sauda chief Gurmeet Ram Rahim in a helicopter in which he was flown from Panchkula to Rohtak town to lodged in jail on Friday. (Photo: PTI)

Panchkula: Head of the Dera Sacha Sauda sect Gurmeet Ram Rahim Singh, a self-styled godman, has been moved to a prison in Haryana's Rohtak after he was found guilty of raping two women followers in 2002.

Pictures of him being given special treatment were doing the rounds in the media.

On Friday afternoon, he made a dramatic entry into court, driving 250 kilometres from his headquarters in Sirsa, in a bulletproof car, accompanied by a convoy of 200 cars.

After being arrested Ram Rahim Singh was taken to Rohtak by a helicopter. Pictures showed a woman, carrying a bag and luggage, accompanying him.

After his landing in Rohtak, he was taken to a police guest house that served as a makeshift prison. Later in the evening, he was moved to a prison.

All these visuals were enough for one to believe that Ram Rahim is not just any other prisoner. Ram Rahim was getting a VIP treatment despite being convicted for the rape case.

However, Director General of Police (DG) Prisons, on Saturday, in a clarification, said the former is being treated as a normal prisoner, ANI reported.

"The Dera chief has been locked up in a District Jail, Sonaria at Rohtak and is being treated like a normal prisoner according to the Haryana jail manual," Singh further said.

Clarifying on reports of proving Ram Rahim Singh with 'luxurious' items, K P Singh said no RO system or attendants have been provided to him, as it was said in media reports.

Adding, "There is no air conditioner in the cell where he is locked and is also kept under the surveillance of two prisoners as per the jail manual."

At least 31 people were killed and more than 250 were injured in violence in Panchkula and Sirsa after a special Central Bureau of Investigation (CBI) court convicted Dera Sacha Sauda (DSS) chief Gurmeet Ram Rahim Singh in connection with his alleged involvement in a 2002 rape case.

Even as the court announced that the quantum of sentence against the self-proclaimed god man will be pronounced on August 28, his supporters who had gathered outside the Panchkula court premises; went on a rampage, damaging vehicles (cars and buses), pulling down security barriers, attacking media persons, OB vans and public property.