India   All India  26 Aug 2019  Centre to send team to access floods in Punjab
India, All India

Centre to send team to access floods in Punjab

Meanwhile, the flood situation in Punjab is still critical especially in the border district of Ferozepur where an embankment of Satluj was breached. 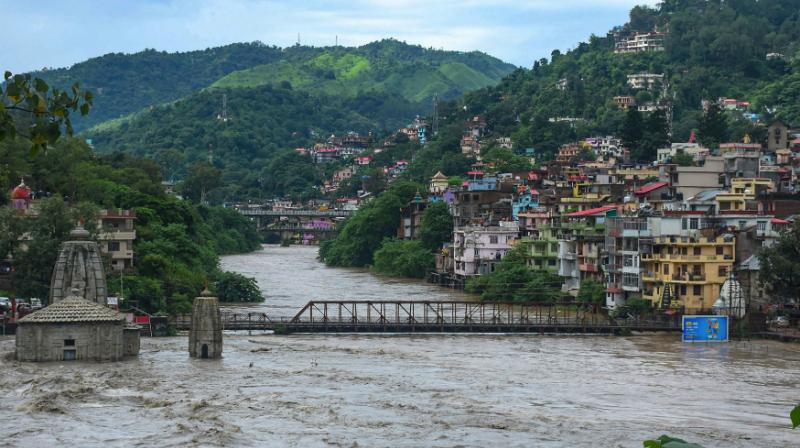 Heavy rains remained unabated in Haryana and Punjab on Sunday causing floods in some parts, while authorities sounded a high alert in the two states. (Photo: PTI)

Chandigarh: The Union government has decided to send a central team to access the flood situation after getting a request from the Punjab chief minister Amarinder Singh for the same. Union home secretary, Ajay Bhalla has informed the state government that a Central team to assess damage on account of floods, would also be sent to Punjab, along with 11 other flood ravaged states.

Meanwhile, the flood situation in Punjab is still critical especially in the border district of Ferozepur where an embankment of Satluj was breached.

Presiding over a high-level meeting to review them, flood situation in Ferozepur, Jalandhar, Kapurthala and Ropar districts, the chief minister directed the principal secretary, water resources, to ensure strengthening of Tendiwala embankment on war-footing to avert the flooding of nearby villages. The chief minister also directed the deputy commissioner of Ferozepur to keep NDRF teams on standby to meet any exigency arising out of the floods. Chief minister Captain Amarinder Singh asked the water resources department to work out a joint action plan with the army authorities to strengthen the embankment at Tendiwala village in Ferozepur district on the Indo-Pak border.

According to deputy commissioner of Ferozepur, in 15 flood- affected villages in Makhu and Hussaniwala area, nearly 500 people had been evacuated to safer places and about 630 persons had been given necessary medical aid. In addition, nearly 950 food packets had been distributed to the people, and adequate arrangements has been made for supply of feed and fodder to the livestock.

He informed work of plugging the damaged embankment at village Tendiwala was going on at war level. Giving further details, deputy commissioner said that Tendiwala is the last village at Indo-Pak border, where massive discharge has been released from the Pakistan side, which has hampered the embankment badly, adding he said that the water in River Satluj is being discharged from Pakistan side in almost double quantity than it goes into Pakistan from Ferozepur.

The deputy commissioner further added that this water contains waste of leather tanneries situated in the Kasoor area of Pakistan causing severe health hazard to the health of people living in these villages.

Notably, the chief minister has already written to the Prime Minister seeking special package of Rs 1000 crore to address the losses resulting from the floods in Punjab. According to preliminary estimates, the state has suffered damage to the tune of Rs 1700 crore due to floods.