India   All India  26 Aug 2019  K'taka gets 3 deputy chief ministers, portfolios allocated to 14 others
India, All India

K'taka gets 3 deputy chief ministers, portfolios allocated to 14 others 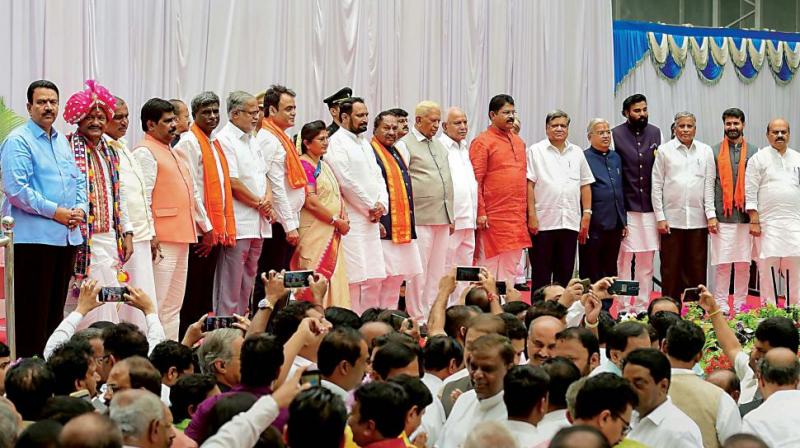 Senior leader Basavaraj  Bommai has been given the charge of Home Ministry but intelligence wing has not been kept a part of the ministry.

All three deputy chief ministers have been allotted additional charges. Deputy CM Karajol to look after Social Welfare, Ashwath Narayan gets Higher Education, IT & BT and Science and Technology and Laxman Sangappa has the additional charge of Transport Ministry.

While senior leader R Ashoka has been allotted Revenue ministry, Muzrai has been kept out of the ministry and Kota Srinivas has been appointed the Minister of Muzrai, Fisheries, Port and Inland Transport.

Excise ministry will be headed by H Nagesh and C T Ravi gets Tourism, Kannada and Culture.

Health and Family Welfare will be looked after by B Sreeramulu and S Suresh Kumar gets Primary and Secondary Education.

The only women minister Jolle Annasaheb has been appointed as Minister of Women and Child Development and Empowerment of Senior Citizen and Differently Abled.