She has suddenly become active by attending social and political programmes in different parts of the state. 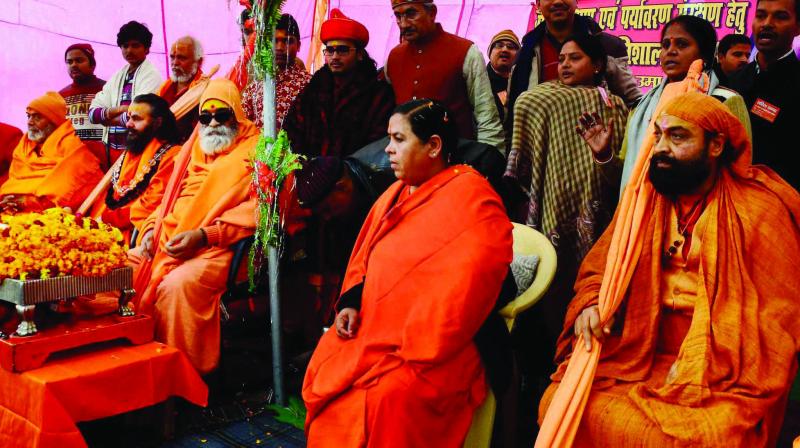 A file photo of then Union water resources minister Uma Bharati with Shankaracharya Vasudevanand Saraswati and other sadhus during a campaign to save River Ganga at Magh Mela in Allahabad. (Photo: PTI)

Bhopal: Firebrand saffron leader and former Union minister Uma Bharti has suddenly become active in Madhya Pradesh politics, causing unease in her rival camps in the BJP in the state.

Ms Bharti who was shifted to Uttar Pradesh from Madhya Pradesh by her party following her rivalry with former chief minister and BJP national vice-president Shivraj Singh Chouhan in 2009, has of late seemed to have revived her interests in MP politics.

She has started touring the state to participate in various social and political programmes. She was seen particularly confining herself to her former strongholds of Bundelkhand and Bhopal regions of MP.

She had earlier declared not to be in the fray in the March-April Lok Sabha elections this year citing health reasons. She had however made it clear that she would return to electoral politics in 2024 LS polls.

Sources in BJP disclosed that Ms Bharti who is currently national vice-president of the party, had chosen not to contest the 2019 LS polls as she was not confident of retaining her Jhansi seat. Besides, her attempt to return to MP politics by contesting from a seat in the state in the last LS elections was foiled by her arch rival Mr Chouhan.

Ms Bharti, who had steered BJP to sweep Assembly elections in MP in 2003, had to resign from the post of chief minister in 2004 in the wake of a warrant issued by a court in Karnataka in connection with a riot case. Her dream to return to MP politics had remained unfulfilled so far.

She has suddenly become active by attending social and political programmes in different parts of the state in recent times.

“I will take up whatever responsibilities given to me by the party,” she told reporters in Gwalior recently.

In fact, she set alarm bells ringing in the camp of former chief minister Shivraj Singh Chouhan, when she came to the defence of former minister Narottam Mishra in the wake of the Kamal Nath government tightening noose around his neck in the alleged e-tendering scandal by arresting his two former private secretaries.

Ms Bharti was the first leader who  backed Mr Mishra on the issue. Ms Bharti’s decision to stand by Mr Mishra had reportedly prodded Mr Chouhan to defend Mr Mishra who  was said to be upset that he was left to fend for himself when he was cornered by the Nath government.

Mr Chouhan who has been given charge of membership drive in the party, has been resisting the move by the Central leadership to shift him to the Centre, much to the chagrin of his rivals in the BJP in MP.

“Ms Bharti is trying to emerge as a rallying point for anti-Chouhan leaders in the BJP in MP, causing discomfort in the Shivraj camp,” sources in the party said.

Her recent statements targeting the chief minister Kamal Nath and Congress veteran Digvijay Singh were seen as part of her design to stage a comeback to MP politics, sources added.