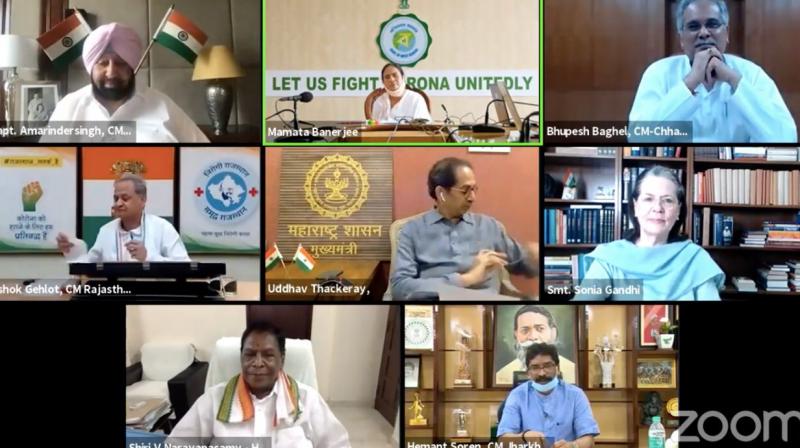 Chief Ministers of various Opposition parties on Wednesday discussed the issue of GST payment to states, with Congress President Sonia Gandhi saying the Centre's refusal to reimburse the states was nothing short of betrayal of the people by the Modi government.

In her introductory remarks, Sonia Gandhi said she agreed with Banerjee and Thackeray that all opposition-ruled states should together fight the Centre for their rights.

"We have to work together and fight together against the Central government," Gandhi said at the meeting while endorsing Banerjee and Thackeray.

"We should decide whether we have to fight or fear," Thackeray said at the meeting.

Banerjee earlier said the situation was "very serious" and Opposition-ruled states should fight unitedly. Gandhi called for more such meetings of like-minded parties in the larger interest of the country and the public's good.

On GST and corona-induced economic crisis

Gandhi said the issue of GST compensation being paid to states on time according to laws passed by Parliament is crucial but this is not happening.

She said dues have accumulated and the finances of all states have been affected badly, while the central government continues to profiteer from "unilateral" cesses which are non-shareable with states and corner this revenue.

"This refusal to compensate the states is nothing short of a betrayal by the Modi government and a betrayal of trust of the people of India," she said at the meeting.

Gehlot urged Gandhi to lead a delegation of Opposition CMs to the prime minister or president to discuss the issue of economic impact due to the coronavirus-induced lockdown.

The Rajasthan CM also accused the Centre of “doing nothing” at a time when the revenue collection has declined and people are suffering.

Everyone knows what economists are saying but the Centre "did nothing except holding video conferences", he said, claiming that the Union government did not consider their suggestions.

Gandhi termed the draft Environmental Impact Assessment (EIA) legislation as "anti-democratic" and alleged that the laws to protect the environment and public health are being weakened by the Modi government.

"There has been a nationwide outcry against the Draft EIA Notification 2020 which is deeply anti-democratic. Laws meant to protect the environment, livelihoods and public health are being weakened," she said, noting that the auction of coal mines has also been objected to by some chief ministers.

She said announcements like the National Education Policy should worry the Opposition as they are a setback for secular and scientific values and reveal the "insensitivity" of the government.

"This is a setback for progressive, secular and scientific values and reveals insensitivity to what the states have been saying. Problems of students and examinations are being dealt with very uncaringly," she said.

On students' problems and the issue of exams arising out of the pandemic situation, she said it is being dealt with uncaringly by the Centre. Banerjee urged all chief ministers to together move the Supreme Court for postponing the NEET and JEE exams as students are not prepared.