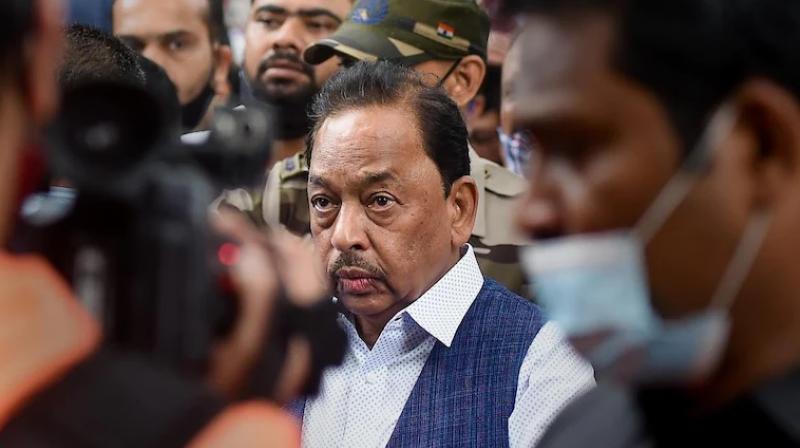 Rane was arrested while touring the state for the BJP’s Jan Ashirwad Yatra from Mumbai to Sindhudurg. (Photo: PTI)

Mumbai: A day after his arrest and release on bail, Union minister Narayan Rane has justified his ‘slap Uddhav Thackeray’ remark, saying he made the comment “because of pride in my country.” He also made it clear that he would resume his Jan Ashirwad Yatra from Friday. On the other hand, Shiv Sena continued name-calling the Union minister.

“I am not afraid of anyone and I am not backing out. My words were an expression of anger against the chief minister (Uddhav Thackeray) who forgot the year of India’s Independence,” he added.

Mr Rane, Union Minister for Micro, Small and Medium Enterprises, was arrested on Tuesday by Maharashtra Police for threatening to “slap” Chief Minister Uddhav Thackeray. “It is shameful that the chief minister does not know the year of independence. He leaned back to enquire about the count of years of independence during his speech. Had I been there, I would have given (him) a tight slap,” he had said. He was released on bail in Mahad in Raigad, after spending nearly nine hours in police custody.

Mr Rane also invoked Mr Thackeray’s earlier “will hit with slippers” comment about his Uttar Pradesh counterpart Yogi Adityanath on this occasion. Three years ago, the Shiv Sena chief had slammed the UP CM saying “‘Is he a yogi or a dhongi (hypocrite)? He wore chappals (slippers) while garlanding Chhatrapati Shivaji Maharaj. I felt like hitting him with the same chappal. Who are you to even stand before a statue of Maharaj?” Mr Thackeray had said.

“Was that not a crime?” Mr Rane asked while criticising Maharashtra CM’s past comments attacking BJP leaders using foul language.

The union minister was arrested while touring the state for the BJP’s Jan Ashirwad Yatra from Mumbai to Sindhudurg. However, he claimed that he would resume the Yatra from Friday. “The yatra will resume in Sindhudurg and it will not be discontinued,” he said.

Meanwhile, BJP MLA Ashish Shelar has demanded a CBI inquiry into the alleged involvement of Shiv Sena leader and state minister Anil Parab in the arrest of Mr Rane. In a video clip that has gone viral, Mr Parab is seen ordering police officers to arrest the union minister without delay.

The Shiv Sena has continued to attack Mr Rane calling him a ‘balloon with holes’ and ‘croaking frog.’ In an editorial in its party mouthpiece Saamana, the Sena said there is no relation between Mr Rane and Sanskar. As a result, despite being Union Minister, he behaves like a chhapri gangster.

The editorial also said that Mr Rane was never great or conscientious. He got all the name and fame when he was in Shiv Sena. Since he shifted his loyalty from the Sena to other political parties, he lost to the Sena four times including Assembly and Loksabha elections. In short, he can be described as a "balloon with holes".

“Who is Mr Rane? He himself announced that he is not a normal person. Is he abnormal,” the editorial said.

The Sena also defended the MVA government’s action against Mr Rane saying he had crossed all limits.

The editorial also alleged that the BJP has “unleashed Rane” only to trouble the Sena after losing power in Maharashtra.