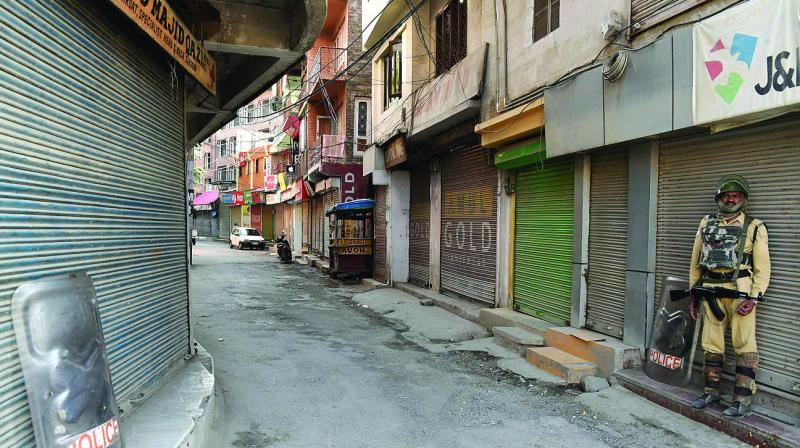 A security jawan guards during a strike call given by Kashmir Traders and Manufactures Association to protest against NIA, at Kukarbazar in Srinagar. (Photo: AP)

New Delhi: Life came to a standstill in most parts of Kashmir Valley on Monday as traders and transporters obeyed a shutdown call against the arrests and raids being conducted by National Investigating Agency (NIA).

The call for the shutdown had been issued by Kashmir Traders and Manufacturers Federation after the NIA summoned a leading business leader Muhammad Yasin Khan to its New Delhi headquarters for questioning.

NIA on Monday questioned Yasin Khan and Aala Fazil, a PhD student of Kashmir University, in connection with a case related to terror funding.

They had been summoned by NIA and were questioned for funding of  groups involved in incidents of stone pelting.

NIA is conducting investigations in connection with a case registered in May.

In its FIR the investigating agency had also named Hafiz Saeed, Hurriyat conference and terror groups like Hizbul Mujahideen as well as Lashkar-e-Tayeeba as accused.

In addition close associates of Geelani like Ayaz Akbar, who also happens to be the spokesperson of  a hardline separatist organisation Tehreek- e-Hurriyat and Peer Saifullah have also been arrested.

Others include Shahid-ul-Islam, who is the spokesperson of the moderate faction of Hurriyat, Mehrajuddin Kalwal, Nayeem Khan, Farooq Ahmed Dar alias Bitta Karate, a photo-journalist Kamran Yusuf and Javed Ahmed Bhat.