Pak Army is best known for lies, terrorism and brutality

The electoral process in J&K has also been majorly targeted by killing of panchayat leaders and destruction of panchayat offices/assets. 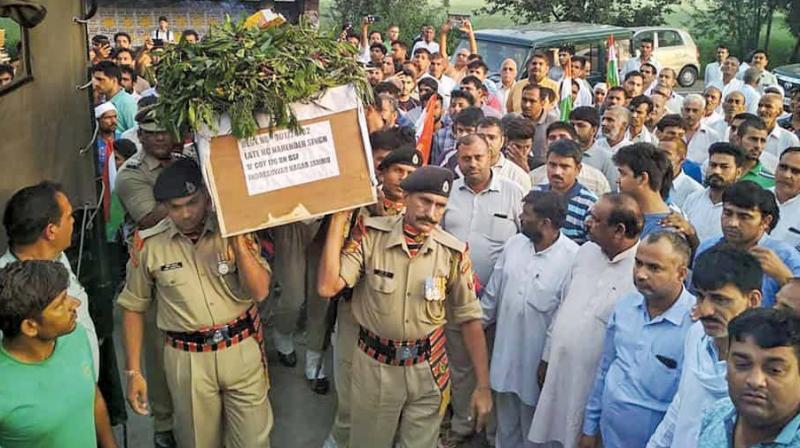 BSF soldiers carry the body of head constable Narendra Singh after it arrived in his native village in Sonipat, Haryana, on September 20. (Photo: PTI)

He took bullets but everyone knows what Pakistan’s Border Action Team (BAT — a combo of Pakistan Army commandos and terrorists) does. I can’t mention that. There has to be some response... how long should we mourn?” said Mohit, the angry and anguished son of head constable Narendra Singh of the Border Security Force, killed with utter brutality on September 20, 2018.

A look at some of Pakistan and its Army’s lies and ironies is relevant. This brutal act came a few days after India’s cricketer-turned-television presenter-turned-politician Navjot Singh Sidhu went to Pakistan in August 2018 to felicitate its latest Prime Minister, cricketer-turned-playboy-turned-politician and Pakistan Army’s puppet, Imran Khan. And during Mr Sidhu’s visit, he also indulged in the infamous “Jattaan di jhappi” with Gen. Qamar Javed Bajwa (embrace of Jats — Mr Sidhu is a Jat Sikh, Gen. Bajwa is a Jat surname, which he has retained despite his ancestors’ conversion to Islam). This was also at a time when both Gen. Bajwa and Mr Khan, known as Pakistan Army’s puppet, spoke about peace talks. On his return Mr Sidhu announced that Gen. Bajwa had told him that Pakistan would open the Kartarpur Corridor on Guru Nanak’s 550th birth anniversary. Kartarpur gurdwara in Pakistan is three kilometre from the India-Pakistan border. In 2000, Pakistan reportedly agreed to allow Sikh pilgrims from India to visit the shrine without passport/visa by constructing a bridge from the Indian side of the border to the shrine.

In Pakistan’s history, whenever its civilian head of state even talked about talks, the Pakistan Army responded immediately with a telling terrorist attack as a reminder, that peace with India cannot happen. However, this time around Gen. Bajwa’s peace overture has come mainly because of the walloping the Pakistan Army has been getting from the Indian Army before and after the September 2016 surgical strikes. The Pakistan Army is very sensitive to losing its own soldiers. That is why it has specialised in outsourcing its anti-India/Kashmir-centric operations to terrorists trained and supported by it, as it is a much cheaper option. There is an unending supply line of young boys from poor homes indoctrinated in Pakistan’s many madrasas and ideal cannon fodder.

On September 6, Gen. Bajwa in his Pakistan’s Defence and Martyrs’ Day speech, vowed to “avenge the blood being shed on the border… Pakistan Army had been ‘valiant’ during the wars of 1965 and 1971…”

Considering that Pakistan was raised on lies, has been repeatedly lying, compounding lies and, in fact, institutionalising lies, Gen. Bajwa’s and his predecessors’ oft repeated false claims about the Pakistan Army wiping out/not allowing terrorists on Pakistani soil are not at all surprising. However, the record on Pakistan Army’s performance in 1965 and 1971 must be set straight.

The second war Pakistan waged against India in September 1965 exposed the bluff and bluster its leaders, self-promoted Field Marshal Ayub Khan and Prime Minister Zulfikar Ali Bhutto as well as the ineptness and poor leadership of many of Pakistan Army’s field commanders, and the lack of training of all ranks. Just one example is Pakistan Army’s major failings in tank warfare, which caused them very heavy losses of then modern American Patton tanks against Indian Army’s vintage Centurion tanks, were: (a) Pakistani tank crews had very little or nil training on the Patton tank and (b) owing to fear of dying by flames, Pakistani tank crew bailed out as soon as their tank was hit even if it had not caught fire and its guns were still functional.

One of the ironies during the 1965 India-Pakistan war was that one of the Indian Army’s distinguished armoured regiments, 4 Horse (also known as Hodson’s Horse), in which Ayub Khan’s father Risaldar Mir Dad Khan served, destroyed 79 Pakistani tanks and 17 recoilless guns — the largest by a single regiment.

There soon came a stage in that war when Pakistani Patton tank crews began avoiding engagements with Indian Centurions. On spotting any Centurion tanks, many Pakistani tank crews abandoned their tanks and disappeared in the tall sugarcane fields, only to be captured subsequently. The very low mileage showing on the gauges of these intact Pakistani Patton tanks captured by 4 Horse and some other Indian Army regiments was a clear indication that that the Pakistani tank crews had not been trained on them.

The third war Pakistan waged against India in 1971 was preceded by Pakistan’s suppression of the Bengali masses of erstwhile East Pakistan, which resulted in a determined group of Bengali youth who forming the Mukti Bahini (freedom force), which was trained by the Indian Army and became a valuable asset in operations against the rogue and barbaric Pakistan Army, which killed over three million Bengalis in the largest ever genocide since the Holocaust and raped up to 4,00,000 Bengali women, many of who were kept confined in the quarters/billets of Pakistan Army deployed there.

Within 13 days of the Pakistan Army declaring full-fledged war by attacking Indian airfields on December 3, 1971 and thereby opening up the Western front, 93,000 Pakistan armed forces personnel surrendered to the Indian Army, after being surrounded by it from all around in erstwhile East Pakistan, which it lost, as it became liberated and emerged as a new nation, Bangladesh.

The cruel inhuman conduct of the Pakistani troops in the presence of their officers and also by their officers is another of Pakistani Army’s hallmarks which continues till date. One of many instances of utter brutality was the plight in 1971, in the Eastern theatre of Lt. Chandavarkar, the youngest of 45 Cavalry’s officers, caught by the Pakistan Army. Tied to a tree and for each question that was not answered, his limbs and sexual organs were cut by the Pakistani junior commissioned officer, who also chopped off his ear lobes, fingernails, toes, and fingers and finally gouged out his eyes before shooting him in the chest. Yet another unfortunate Indian officer in that theatre, who suffered a similar fate, was Second Lt. M.P.S. Choudhary, commissioned in November 1971. This was in sharp contrast to the manner in which the Indian Army treated Pakistani prisoners of war (POWs). The 93,000 Pakistani POWs were pleasantly shocked at the humane treatment they got in their POW camps in India, as promised before their surrender by then Indian Army Chief General, later Field Marshal, SHFJ Manekshaw.

An absolute shocker exposed by Hassan Abbas in his book Pakistan’s Drift Into Extremism, is of how on the eve of Pakistan forces surrender at Dhaka, when Lt. Gen. A.A.K. Niazi was desperately trying to reach Pakistan’s second dictator President Gen. Yahya Khan on telephone and not succeeding, it was because the latter was partying with his then latest paramour and other guests — all nude.

Back again to Gen. Bajwa’s Defence Day speech, “…Pakistan’s enemies knew that they could not beat it fair and square, and had thus subjected it to a cruel, evil and protracted hybrid war…” Again, classic Pakistani lies — accusing their adversaries of exactly what they themselves are doing. The barbaric killing of BSF’s Narendra Singh was preceded by a spree of abductions of policemen by Hizbul Mujahideen (HM). The bodies of three slain policemen are identified as constable Nissar Ahmed and special police officers Firdous Ahmed and Kulwant Singh. Firdous had married a polio victim and Kulwant’s was the lone Rajput/Hindu family in his village. Both have two little children.

A video purportedly from HM, warning all Kashmiris working as special police officers (SPOs) to resign has sent shock waves to the 102,000 strong J&K police force with at least seven SPOs announcing their resignations on the social media. The ministry of home affairs has denied these reports as false and scare mongering.

The electoral process in J&K has also been majorly targeted by killing of panchayat leaders and destruction of panchayat offices/assets.

Following constable Narendra’s mutilation, New Delhi decided to cancel the meeting between foreign ministers of both countries on the sideline of the United Nations General Assembly meet. While that is a clear message to Pakistan, another one will be the celebration the September 2016 surgical strikes in September-end at the India Gate.