Dancing Waters: Speaking of water conservation with Kathak and drums

The best part of the composition was the blend of drums and instruments like the violin, tabla, guitar and sitar with Kathak. 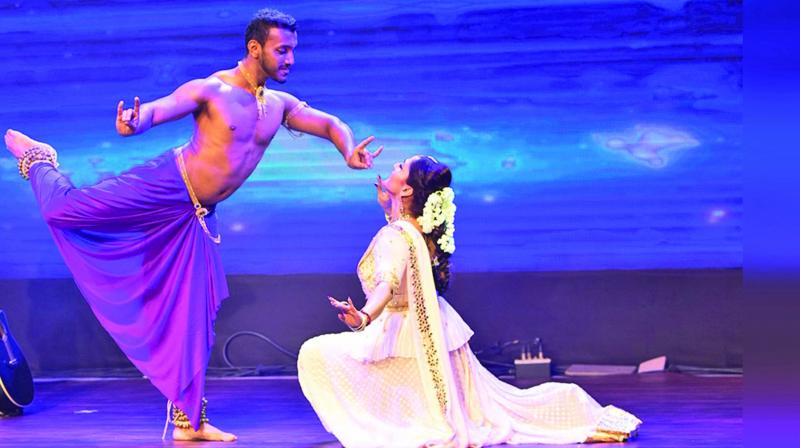 The show ‘Dancing Waters’ by Neha Banerjee and A. Shivamani made it’s debut in Mumbai but will be travelling to other parts of India, raising awareness about this cause, and take my word, it is one not-to-be-missed show. If you are a fan of Shivamani’s style of percussions and traditional Kathak dance then this is a show that is a treat for the eyes as well as for the ears.

Kathak is one of the most fantastic Indian classical dances that has the ability to blend with various other styles of dance and music. Recently, the city of dreams, Mumbai, saw a magnificent dance show which was a beautiful blend of Kathak with drums titled “Dancing Waters”. What made Dancing Waters unique and totally different was that it spoke of conservation of water through the artistic language of dance and music.

The legendary world percussionist A. Shivamani along with the super graceful Kathak dancer Neha Banerjee, who is the seniormost disciple of Padma Vibhushan, Padma Bhushan Pandit Birju Maharaj, staged this extraordinary show that made the audience understand the importance of conservation of water. The Mukesh Patel auditorium was packed with guests wanting to support the much needed cause and also to see the one-of-its-kind blend of A. Shivanmani’s and Neha Banerjee’s skills. Sargams, Taranas and the traditional Kathak format were showcased in the event. I would describe the show’s composition as Teentaal but composed in a very mature manner.

The best part of the composition was the blend of drums and instruments like the violin, tabla, guitar and sitar with Kathak . Various great artistes like Vivek Mishra on tabla, Somnath Mishra on vocals, Sukhdev Mishra on the violin, Rajneesh on keyboards, Utkarsh Shrivastav on guitar and Alka Gujjar on sitar came together to create magic on stage with dance and drums. The choreography was guided by Vijayshree Chaudhary, one of the oldest disciples of Pandit Birju Maharaj. Lights and stage designing was by Sangeet Natak Akademi awardee Gyandev Singh, show styling was by Richa Ranawat and dance support was given by the very talented Omkar Gotad.

Post the breathtaking show of percussion and dance, I sat down with the magical duo of Neha and Shivamani to ask them why they did what they did and this is what they had to say: 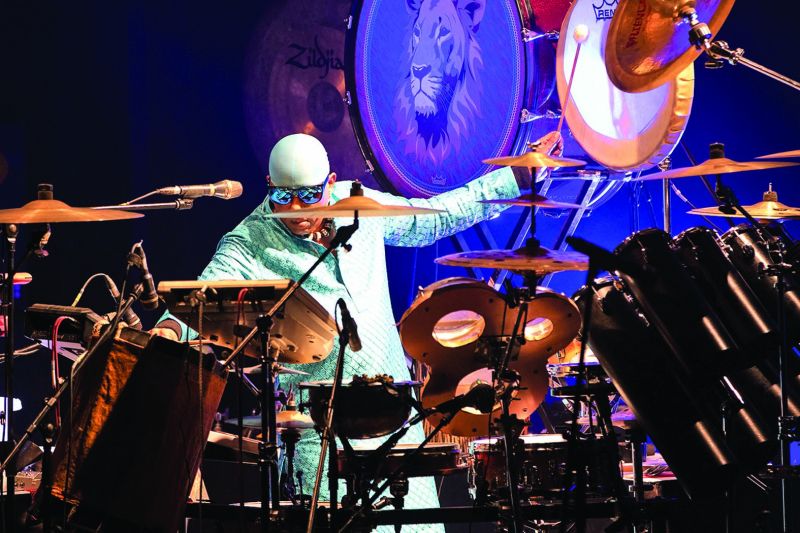 How did this collaboration come around?

Neha: I always wanted to work with Shivamani sir and when I thought of this theme of drums blending in with my Kathak I could think of no one but the best, so this collaboration took place and I am glad it worked out well.

Shivamani: Neha came to me with this concept, performing with her was great. Neha being a disciple of my favourite Pandit Birju Maharaj made it even more special for me. The whole theme of water made this concert very unique. We tried our level best to support the important issue of water conservation through this concert.

Why did you choose this theme of Dancing Waters?

Neha: We rarely pay importance to water and water conservation, all the time take mother nature for granted — we are living in a world where soon water will be scarce — through this show we wanted to awaken people and make them realise the importance of water conservation.

Shivamani: Today, we are living in a world where water conservation is a very big issue. Through our show I wanted to touch this important topic and bring light to this much-needed cause and I am glad we succeeded in it.

What was the most challenging and exciting part of the show?

Neha: To keep up with the speed of the drums by A. Shivamani — as a dancer dancing with electronic instruments like the keyboard and guitar where the sound is very high — I was afraid that my footwork may not be audible. Thanks to really great sound by Herman Lobo, the audience review about my footwork was great, each and every sound was clear and loud enough for the audience.

I was also a bit afraid during the Jugalbandi section, but I am so happy that it turned out to be best part of the show.

Shivamani: I love fusion work — the artiste in me feels a great high and bringing it on stage with a live audience is even better still. I go into a complete trance — this is what is challenging, and also exciting at the same time for me.

At the show Mr Ajay Rautaray, Sr. DVP, (Accounts) was honoured on behalf of Kotak Life Insurance. Dr Aneel Kashi Murarka ably supported the cause of water conservation and the celebrities from the film and television world could not stop cheering throughout the show. Actress and dancer Shantipriya Ray, Mitaali Nag, Dj Sheizwood, Hansa Singh ,Prashant Virender Sharma, Vishal Srivastav, Rajeev Mahavir, Rakesh Paul and many others were glued to their chairs asking for more.

Neha Banerjee, who shines the tiara of Mrs Universe 2017, Mrs West Central Asia 2017 and winner of Fem Mrs India 2016, worked on this theme and the show for over five months and finally, super excited after the success of the show, she said, “It was an honour and a privilege to get an opportunity to work with one of the greatest percussionists of our times. I’ve been wanting to work with drums and Kathak for some time and was thrilled when Sivamaniji agreed to doing something wonderful together. I chose water conservation as the subject of our recital and performance because as an artiste I wanted to use my craft to draw attention to a subject as important as this.”

The show “Dancing Waters” by Neha Banerjee and A. Shivamani made it’s debut in Mumbai but will be travelling to other parts of India, raising awareness about this neglected cause, and take my word, it is one not-to-be-missed show. If you are a fan of Shivamani’s style of percussions and traditional Kathak dance then this is one show that is a sheer treat for the eyes as well as for the ears.

Sandip Soparrkar holds a doctorate in world mythology folklore, is a World Book Record holder, a well known Ballroom dancer and a Bollywood choreographer who has been honoured with three National Excellence awards, one National Achievement Award and Dada Saheb Phalke award by the Government of India. He can be contacted on sandipsoparrkar06@gmail.com