Further, they have sought the stay of the Speaker’s decision holding them disqualified for the rest of the term of current House. 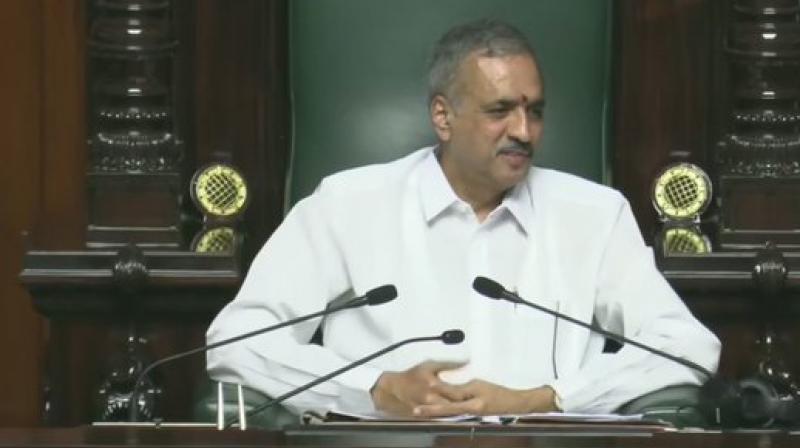 New Delhi: The Karnataka Assembly Speaker on Wednesday told the Supreme Court that the resignation of a lawmaker, for whatever reasons, from the state legislature was a matter of right under the Constitution, as an elected representative can’t mechanically yield to the party whip unmindful of the views of the people he represents.

“Giving up the membership of the legislature is a right. You can’t be blindfolded and stick to the whip and betray the views of the people who have elected you,” Karnataka Assembly Speaker Vishweshwar Hegde Kageri told a bench of Justice N.V. Ramana, Justice Sanjiv Khanna and Justice Krishna Murari.

The top court is hearing a plea by 17 disqualified Karnataka Assembly lawmakers seeking to put on hold the Election Comm-ission notification for elections to the seats that fell vacant after they were unseated following their disqualification by the former Speaker K.R. Ramesh Kumar.

In three-fold alternate prayers, the disqualified MLAs have sought the stay of the September 21, 2019, Election Commissi-on’s notification for holding elections to the vacant seats for which nomination would start from September 29, 2019.

Alternately, they have pleaded that the elections be deferred till the court decides on their plea seeking the quashing of the Speaker’s decision disqualifying them and that too disqualification extending till the expiry of the term of the current House that ends in 2023.

Further, they have sought the stay of the Speaker’s decision holding them disqualified for the rest of the term of current House.

The 17 Karnataka MLAs belonging to ruling alliance of Congress and JD(S) were disqualified after they defied the whip and abstained from voting on the confidence motion moved by the former Karnataka CM.

If the Speaker is satisfied that the resignations were given voluntarily and were genuine, Mehta told the court that then it has to be accepted “immediately” without going into the reasons for the resignation.

The disqualified lawmakers had rebelled against the then Chief Minister Kumaraswamy.

He recalled that the top court had given the rebel MLAs the option to attend or stay away from the assembly proceedings on the confidence motion then moved by Kumsaraswamy.

Senior counsel C.A. Sundram appearing for disqualified MLA K. Sudhakar said that the former Speaker acted in haste and painted every body with the same brush.

Sundram told the court that while rest of the MLAs took flight to Mumbai, stayed in a hotel and came back in a chartered flight but Sudhakar never left Bengaluru and all through he was in the city.

He said that Speaker is expected to be impartial and decide on the resignation on two tests – they are voluntary and genuine.  Speaker can’t go into any other consideration relating to the motives or the steps they would take after their resignations are accepted.

Telling the court that rebel lawmakers were not happy the way coalition government under Chief Minister Kumaraswamy was functioning and wanted to go out, Sundaram said pointing out Speaker can’t act as a party president.

If elections to 17 vacant seats are not stayed, Sundram said that the plea by disqualified lawmakers would become infructuous.

Arguments will continue tomorrow (Thursday) when senior counsel Kapil Sibal would respond to the interim plea for the stay of elections.