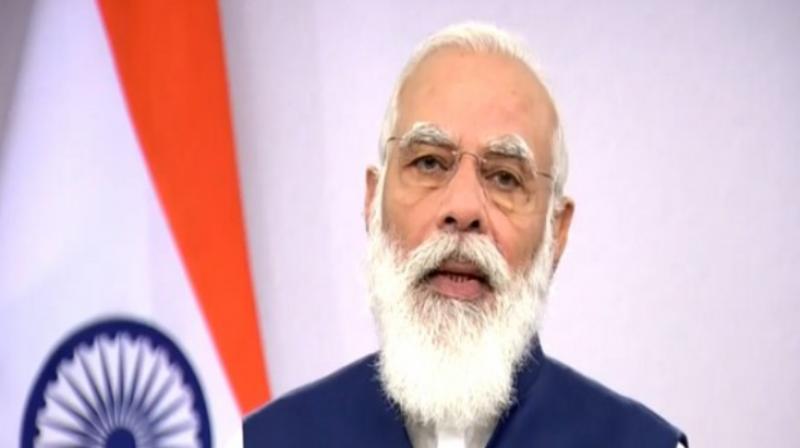 Prime Minister Narendra Modi on Saturday addressed the landmark 75th session of the UN General Assembly through a pre-recorded video statement, as world leaders did not travel to New York for the annual gathering due to the coronavirus pandemic.

Modi questioned the world over India being kept out of the decision-making structures of the United Nations, asserting that reform in the responses, processes and in the very character of the global body is the "need of the hour." He also raised questions on the response of the United Nations in combating the COVID-19 pandemic. The prime minister also said that a gesture of friendship by India towards one country is not directed against any third country.

Modi assured the global community that India will use its production and delivery capacity to help all humanity in fighting the deadly disease.

Modi said that even during these very difficult times of the raging pandemic, India's pharmaceutical industry has sent essential medicines to over 150 countries. "As the largest vaccine producing country of the world, I want to give one more assurance to the global community today. India's vaccine production and delivery capacity will be used to help all humanity in fighting this crisis," Modi said in a strong assurance to the international community that is battling the devastating coronavirus pandemic.

In India, the deadly virus has infected nearly 6 million people and killed more than 93,000.

The prime minister's remarks questioning the UN's effectiveness in combating the pandemic came amidst the strident criticism of the role played by the World Health Organisation (WHO) by US President Donald Trump, who this week alleged that the top world health body was virtually controlled by China.

Modi told the 193-member UN General Assembly that in India and the neighbourhood, we are moving ahead with phase 3 clinical trials in India."

UN REFORMS ARE A MUST: PM

Stressing that stability in the United Nations and empowerment of the world body are essential for the welfare of the world, the prime minister pushed for UN reforms and the much-delayed expansion of the powerful Security Council. Notably, India will begin its two-year term as an elected non-permanent member of the 15-member Council from January 1 next year.

"For how long will India be kept out of the decision-making structures of the United Nations? How long would a country have to wait particularly when the transformational changes happening in that country affect a large part of the world?" Modi asked.

"Today, people of India are concerned whether this reform-process will ever reach its logical conclusion," he said, adding that every Indian today, while seeing the contribution of India in the world organisation, aspires for India's expanded role in the United Nations.

"Reform in the responses, in the processes, and in the very character of the United Nations is the need of the hour," he emphasised.

INDIA'S MESSAGE TO THE WORLD

The prime minister also emphasised that when India strengthens its development partnership with a country it was not with any "malafide intent" of making the partner country "dependent or hapless."

The prime minister explained that from India's Neighbourhood First Policy' to views on the Indo-Pacifc region, the country has always worked for the interests of humankind.

"Any gesture of friendship by India towards one country is not directed against any third country. When India strengthens its development partnership, it is not with any malafide intent of making the partner country dependent or hapless, Modi emphasised. We have never hesitated from sharing experiences of our development, he said.

Modi enunciated his government's ambitious Aatmanirbhar Bharat campaign, saying a self-reliant India will be a "force multiplier" for the global economy.

The prime minister said India's experiences and its developmental journey marked with its ups and downs will only add to strengthening the path to global welfare.

"In the changed circumstances of the post-pandemic era, we are moving forward with the vision of a 'Self-reliant India'," he said. "A self-reliant India will also be a force multiplier for the global economy," he said.

To address the economic stress brought by the COVID-19 pandemic, the Modi government announced an over Rs 20 lakh crore Aatmanirbhar Bharat programme aimed at boosting domestic capacity and cutting reliance on imports.

"Following the mantra of 'Reform-Perform-Transform', India has made great efforts to bring about transformation in the lives of millions of its citizens," he said.