India   All India  26 Oct 2017  US: 3-yr-old girl had no difficulty eating, says owner of Indian orphanage
India, All India

US: 3-yr-old girl had no difficulty eating, says owner of Indian orphanage

The father changed his story to police later, saying the girl choked on milk and died in the family's garage before he took her body away. 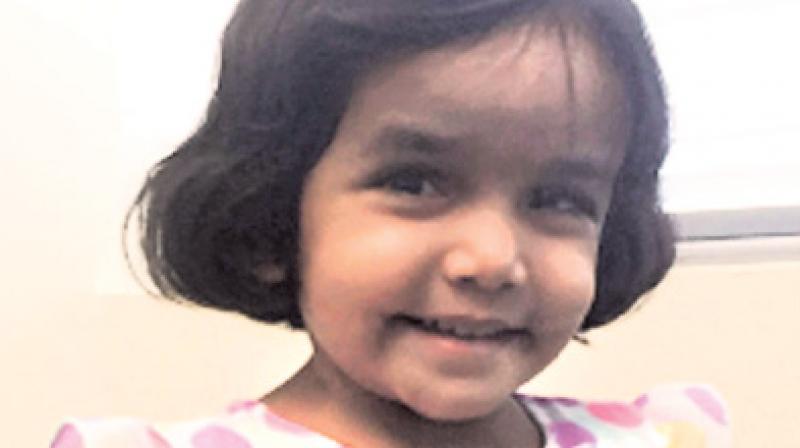 The body of 3-year-old Sherin Mathews was found on Sunday in suburban Dallas in a culvert under a road about a half-mile from her parents' home. (Photo: File)

Dallas: The owner of a now-closed orphanage in India where a young girl was living before a Texas couple adopted her in 2016 says the child had no difficulty eating despite her adoptive father's account to police when reporting her missing.

The body of 3-year-old Sherin Mathews was found on Sunday in suburban Dallas in a culvert under a road about a half-mile from her parents' home. Police and volunteers had been searching for the girl since Oct 7.

Investigators have said that her father, Wesley Mathews, initially told them he had sent the girl outside at 3 am on Oct 7 to stand near a tree across the alley from the family's fence because she refused to drink her milk. He said he went to check on her after about 15 minutes.

Mathews told police the girl had been malnourished when she was adopted and needed to eat whenever she was awake to help her gain weight. But orphanage owner Babitha Kumari told television station WFAA the girl had no problems and that the Wesley and Sini Mathews appeared loving when they were going through the adoption process.

"The child had no problem at all when she was here, neither in drinking milk or eating," Kumari said.

A phone call to the international adoption agency believed to have helped the couple adopt Sherin was not returned Wednesday.

Wesley Mathews was initially charged with endangering or abandoning a child after reporting the girl missing on Oct 7. He changed his story to police on Monday, saying the girl choked on milk and died in the family's garage before he took her body away.

He was arrested and charged with felony injury to a child, which carries a sentence of up to life in prison.

Mathews was transferred to the Dallas County jail on Wednesday, which is routine for inmates charged with higher level felonies. The Dallas County Sheriff's Department said he has been placed on suicide watch.

A judge reviewed his bond and left it at $1 million.

Mitch Nolte, an attorney for Sini Mathews, said in a written statement on Wednesday that she has submitted to several long interviews with police since Oct 7, and because she had nothing to do with the "death or removal" of the child's body, her lawyers see no need for her to "endure further police interrogation."