Sharad Yadav spoke to Rahul Gandhi on tie-up and suggested that 'division' among opposition parties is 'minimised as much as possible'. 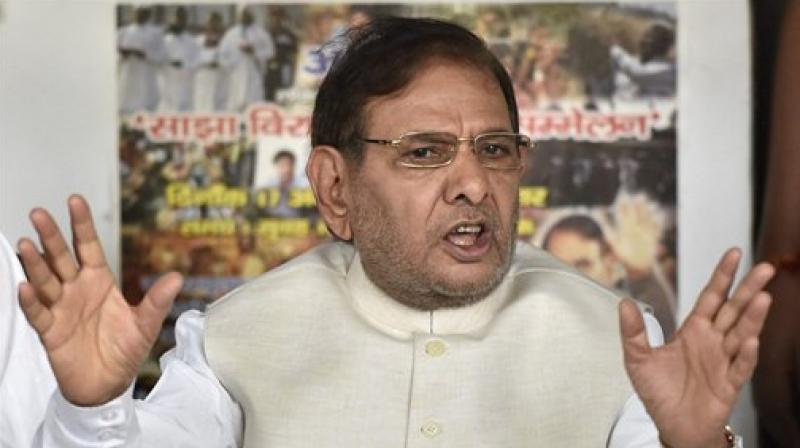 Sharad Yadav said he has spoken to Rahul Gandhi on the tie-up and suggested to him that alliances should be built in such a manner that 'division' among opposition parties is 'minimised as much as possible". (Photo: PTI | File)

New Delhi: The breakaway faction of the Janata Dal (United) (JD(U)) will contest the Gujarat assembly polls in alliance with the Congress, its leader Sharad Yadav said on Wednesday as he pitched for a "minimum division" among opposition parties as they take on the ruling BJP there.

Yadav said he has spoken to Congress vice president Rahul Gandhi on the tie-up and suggested to him the alliances should be built in such a manner that "division" among opposition parties is "minimised as much as possible".

To underline how a united opposition could take on the ruling party effectively, Yadav said the BJP could secure "only 31 per cent" votes as against 69 per cent bagged by opposition in the 2014 general elections.

The Election Commission earlier on Wednesday announced the schedule for assembly polls in Gujarat, which has seen over two decades of BJP-rule. The election will be held in two phases on December 9 and December 14, while votes will be counted on December 18.

"We have already said it...we have already talked about alliance with the Congress. All efforts are being made to ensure that people remain united," Yadav told reporters at his residence in New Delhi.

Asked whether the parties would take Sharad Pawar-led NCP along as they take on the BJP, Yadav said it is the Congress which is in the "driving seat" in Gujarat and it has to decide who should be its alliance partners there.

"What we have discussed with Rahulji is that division is minimised as much as possible," he added.

To a question whether the JD (U) group led by him and the Congress have discussed seat-sharing for the polls, Yadav said there has been no deliberation on the issue till now.

"That will be discussed by our unit there and the Congress," he added.

He also said the Election Commission not declaring the schedule for Himachal Pradesh and Gujarat assembly polls simultaneously - the dates for election in the hill state were declared on October 12 - has dented the image of the poll panel.