Police have arrested more than 1,400 people in connection with Sabarimala protests and registered 450 cases over the past few days. 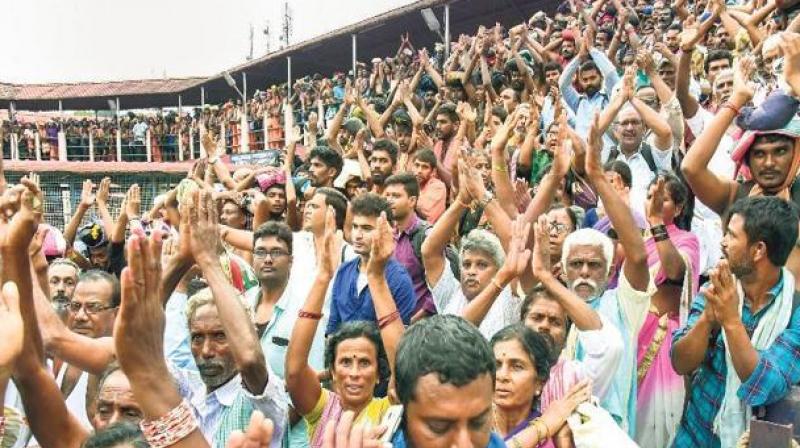 The temple witnessed high drama recently with around a dozen women in the 10-50 age group being prevented by protesting devotees from entering it after the doors were opened for all women following the apex court verdict. (Photo: File)

Kochi: The Kerala High Court Friday warned that a heavy price would have to be paid if innocent persons are arrested, as it rapped the state government on the arrest of Ayyappa devotees who had allegedly engaged in violent protests against the Supreme Court order allowing women of all age groups into the Sabarimala shrine.

Taking stringent action against the protesters, police have arrested more than 1,400 people in connection with the protests all over the state and registered 450 cases over the past few days.

"Don't play to the gallery," a division bench, comprising justices P R Ramachandra Menon and Devan Ramachandran, said. Considering a plea challenging the "massive" arrest of Ayyappa devotees, the bench directed that the arrest should be made only after properly investigating such persons' participation in the alleged violent protests.

The court also directed police to investigate whether it was true devotees who had reached the temple for offering prayers during the recent monthly pooja.

Petitioners Suresh Kumar and Anoj Kumar, hailing from Pathanamthitta where the hill shrine is located, alleged that even devotees who participated in the "Nama Japa Yajnam" (chanting of Ayyappa mantras) were harassed by police.

Police reportedly told them that they were liable to be prosecuted for committing various offences, of which they are totally ignorant, they alleged. The temple had witnessed high drama recently with around a dozen women in the 10-50 age group being prevented by protesting devotees from entering it after the doors were opened for all women following the apex court verdict.

The bench also directed the government not to appoint non-Hindus as Devaswom Commissioners. The court gave the direction while disposing of a plea filed by Kerala BJP president P S Sreedharan Pillai, challenging the amendments to the Travancore-Cochin Hindu Religious Institutions Act, 1950, which allow the appointment of non-Hindus as Devaswom Commissioners.

The state government has submitted only Hindus would be appointed Commissioners of the Travancore Devaswom Board and the Cochin Devaswom Board.