'We now have multi-layered security architecture for coastal security including Coast guard and Navy,' Lanba said, 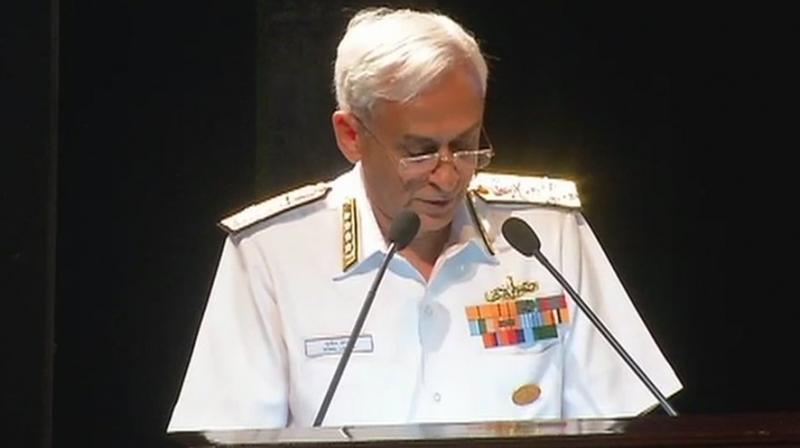 'We have come a long way since then,' he told PTI in an interview in his office in South Block on the 10th anniversary of the 26/11. (Photo: PTI)

New Delhi: India is better prepared and better organised since a group of sea-borne terrorists struck at the heart of Mumbai 10 years back, thanks to a string of security measures including a layered maritime surveillance, Navy Chief Admiral Sunil Lanba has said.

“We have come a long way since then,” he told PTI in an interview in his office in South Block on the 10th anniversary of the 26/11.

The Navy Chief said there has been a paradigm shift in coastal security as vulnerabilities and risks were fixed and a layered maritime surveillance and security architecture was put in place, making the coastline almost impregnable.

“The country is now better prepared and better organised,” Adm. Lanba said when asked about possibility of terrorists taking the sea route again to mount a similar attack on India.

He said the India Navy is now a potent multi-dimensional force, safeguarding India’s interests in the seas and that it is fully prepared to deal with any security challenge facing the country in the maritime domain.

On November 26, 2008, 10 Pakistani terrorists sneaked into Mumbai through the sea, arriving by boat from Karachi, and went on the rampage, carrying out coordinated attacks on the main Chattrapati Shivaji railway terminus, the iconic Taj Mahal hotel, the Trident hotel, and a Jewish centre — all in the heart of the financial capital’s downtown area.

Over 166 people including 28 foreigners from 10 nations were killed in the nearly 60-hour assault that sent shock-waves across the country and even brought India and Pakistan to the brink of war.

The terrorist strike, the worst in India’s history, was seen as an attack on the country’s sovereignty, and it exposed fault-lines in the coastal security network, intelligence gathering while also uncovering the lack of coordination among various agencies.

Adm. Lanba, who is also chairman of Chiefs of Staff Committee, said critical gaps and vulnerabilities in the country’s coastal infrastructure have been addressed, and that a robust surveillance network comprising 42 radar stations linked to a control centre headquartered Gurgaon has been put in place.

“We now have a multi-layered security architecture for coastal security, involving various agencies including the Coast guard and the Navy,” he said, adding that an overhaul of the coastal defence apparatus was carried out in the last few years.

The radar stations were also fitted with high-resolution cameras with a range of 10 nautical miles. Another batch of 38 radar stations is being set up to keep a hawk eye vigil on activities along India’s 7,500-kilometre coastline.

The Navy Chief said that tracking the movement of thousands of fishing boats round-the-clock was a major challenge but now a mechanism has been put into place to track them. He, however, emphasised on the need to improve intelligence gathering to further tighten the existing security apparatus.

He listed colour-coding of fishing boats, their online registration and issuance of biometric cards to the fishermen as some of the important steps as part of enhancing coastal security.

The Navy Chief said data about ships, dhows, mechanized trawlers, fishing boats and all other vessels operating near India’s coasts are analysed round-the-clock.

An Information Management and Analysis Centre (IMAC) was set up in Gurgaon which acts as a nodal agency for national command control and intelligence sharing among the Coast Guard and the Navy, he added.

Standard operating procedures have been formulated for coastal and offshore security among various institutions including the Indian Navy, the Coast Guard and agencies concerned of the coastal states to streamline the efforts of multiple stakeholders.

The Navy Chief said 1,500 landing points for fishing boats are being monitored regularly besides making installation of AIS (Automatic Identification System) transponders mandatory for vessels of 300 tonnes and above for their easy tracking.

As part of efforts to further beef up coastal security, Adm. Lanba said a massive coastal security exercise, christened “Sea Vigil”, covering the entire coastline as well as island territories is being organised in January next year.

“For the first time, such a mega exercise will be held,” he said.

There have been biannual coastal security exercises at the level of states, but for the first time an exercise involving all coastal states, island territories and all central and state agencies is being organised.