The study was facilitated by the Indian army in view of the region’s proximity to the Indo-Pak border. 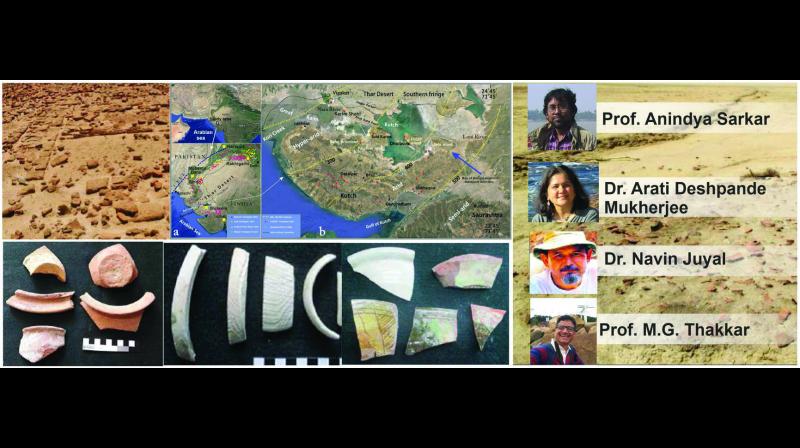 Materials and maps linked to the study; the four researchers (right).

Bengaluru: A team of scientists, which reported that the Indus Valley Civilisation is much older than it was thought earlier, has discovered that climate change and scanty monsoon is not a new phenomenon, but was witnessed thousands of years ago, forcing people to migrate from western territory to greener pastures in the east and southern areas of the country.

In a study sponsored by Isro and Infosys Foundation, these scientists have discovered two unexplored settlements of early Iron Age to early Historic and Historic to Medieval age, close to the Indo-Pak border in the hyper-arid region of western Great Rann of Kutch near the southern fringe of Thar Desert, Gujarat, as well as how human colonies moved towards the east and south because of poor monsoon and drying up of rivers in the west. The uncovering of remains of 3000 years-old Iron Age era marks a breakthrough in archaeology as that period was considered a ‘Dark Age’ because of lack of evidence.  Apart from artifacts like pitcher, jars and bull figurines, numerous animal remains like bones, and teeth have been recovered which helped in reconstructing the social subsistence pattern. The site also yielded black glass bangles, pieces of blue glass, and large number of copper coins. The study was facilitated by the Indian army in view of the region’s proximity to the Indo-Pak border.

Prof Anindya Sarkar of Indian Institute of Technology (IIT), Kharagpur, leader of the research team, told this newspaper, the two sites—Karim Shahi region of the Rann and Vigakot in the Thar desert—were perhaps trade hubs.  At Vigakot,  the team discovered a 1100 year old Chinese Qingbai porcelain probably manufactured in Guangdong province of south China and Sgraffiato potteries of tenth century Persia, suggesting it to be a part of a long distance trade between West Asia and China. He said “We found that bigger plants which are normally seen when the monsoon is good gave way to plants which are noticed in grasslands and ultimately changed to a dry zone. Of course, climate change in that era was due to natural reasons, and depended on earth’s rotation around the Sun. Sparse rain created large scale climate refugees who took refuge in areas with good rainfall. If it could have happened in the past, it will happen in future too.”

The study involved analysis of sediments, pollen and oxygen isotopes in fossil molluscan shells, indicating presence of active river system and some rainfall that probably sustained human habitation from the Early Iron Age to medieval times.

In addition to Prof Sarkar and his colleagues at the Department of Geology at IIT, Kharagpur, other scientists involved were from Physical Research Laboratory (PRL), Ahmedabad, Dean College, PGRI, Pune, and Department of Botany, Calcutta University.