Congress MPs storm into the Well, evicted by marshals; Speaker says he was hurt by MPs’ behaviour 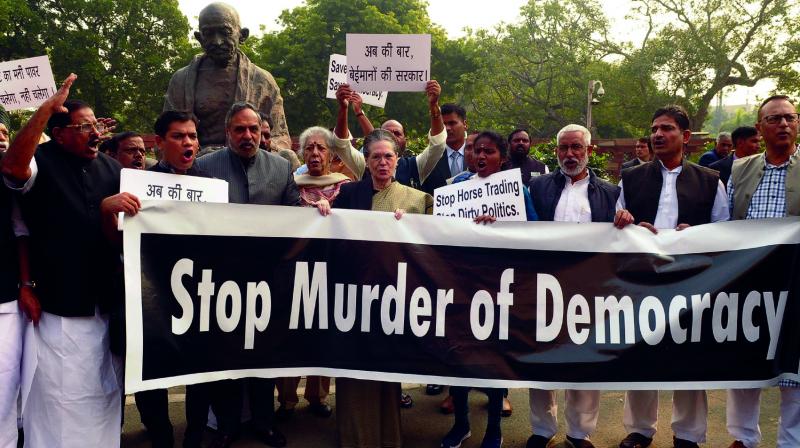 New Delhi: Upset over the sudden swearing-in of BJP’s Devendra Fadnavis as Maharashtra chief minister, the Congress on Monday protested vociferously in both Lok Sabha and Rajya Sabha, forcing both the Houses to be adjourned till noon and later for the day.

While in the Upper House, Congress and other Opposition members such as Left and DMK shouted anti-BJP slogans after Chairman M. Venkaiah Naidu rejected their notices under Rule 267 seeking setting aside of the business to take up the political developments in Maharashtra forcing an adjournment, Lok Sabha saw much more drama.

Shouting slogans and showing banners and placards in the Well, Congress MPs also jostled with marshals to foil attempt to evict them. The Congress MPs had stormed in to the Well the moment proceedings began. They raised slogans such as “Modi government hai hai,” and waved placards with “save Constitution" and "save democracy” written on them along with a black banner that read "stop murder of democracy."

Speaker Om Birla, who had asked Congress MP Rahul Gandhi to ask his question during the Question Hour, urged the members to go back to their seats. However, as the banners and placards continued to be waved, he warned Congress MPs of action while asking them to remove these.

In the meanwhile, Rahul Gandhi got up and said that though he had come to ask a question, but it has no meaning now as “democracy has been murdered in Maharashtra.”

As Congress members intensified their sloganeering and showing banners, a visibly agitated Speaker first warned Hibi Eden and T.N. Prathapan to “put down the pamphlets” else they will be “sent out”. Since these MPs did not yield to the request, Om Birla ordered removal of Eden and Prathapan- who were holding a big banner with 'stop murder of democracy slogan — by the marshals.

At this time other Congress women MPs particularly Ramya Hariharan and Jothimani tried to resist marshals and prevent them from removing Eden and Prathapan. With so much ruckus Speaker adjourned the House first till 12 pm, then till 2 pm.

This is the first time it was adjourned during the 17th Lok Sabha.

In between the first and second adjournments, Congress president Sonia Gandhi was seen discussing the protest strategy with her party MPs.

Later, while speaking to the reporters Om Birla said such a conduct by MPs was unacceptable and will not be tolerated. It is learnt that the Speaker had sought an apology from Eden and Prathapan, who reportedly have refused to do so. The two MPs are expected to be suspended for their conduct with sources adding that the possibility of suspending them for five years is also under consideration.

“I am hurt by whatever happened in Parliament today. It is unacceptable and won't be tolerated…I never want to adjourn the House, I always tried my best that house should function by taking everyone on board,” Birla said. The Speaker may suspend Eden and Prathapan for storming the Well of the House and obstructing Parliament proceedings by shouting slogans and showing banners.

Meanwhile, Congress leader in the House Adhir Ranjan Chowdhury alleged that Ramya Hariharan and Jothimani were "manhandled" when they were protesting in the Well of the House. Jothimani said they have lodged a complaint with Speaker.

“Security personnel manhandled our women parliamentarians. We have never experienced this inside Parliament. We will be waiting to see what action is been taken against responsible people," Mr Chowdhury said. He added Chowdhury that what he saw in the House was unprecedented.  "It is a testing time for us. We have to decide whether we let democracy or authoritarianism prevail in this country," he added.