He has been instructed against getting in touch with the witnesses and also barred from leaving Delhi NCR. 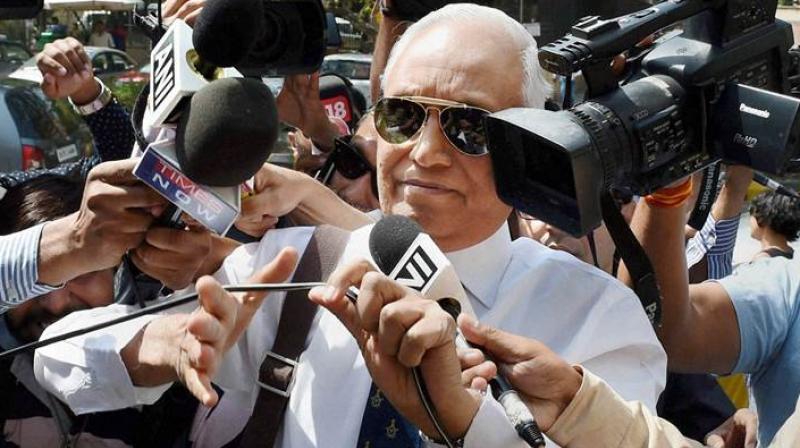 Special CBI Judge Arvind Kumar granted the relief to Tyagi on a personal bond of Rs two lakh and one surety of like amount.

The court, however, imposed certain conditions on the accused and asked him not to try to influence the witnesses and hamper the probe.

The bail applications of other two accused - Tyagi's cousin Sanjeev Tyagi and lawyer Gautam Khaitan - are pending before the court which said it will decide both the pleas on January 4.

During the hearing of the bail plea, S P Tyagi's advocate Maneka Guruswamy had said that her client "could not be deprived of freedom if the investigation is taking time to complete".

She had claimed before the court that in the last four years since the FIR was registered, the CBI has never been able to confront Tyagi with any incriminating evidence till date.

Additional Solicitor General Tushar Mehta, appearing for CBI, had opposed the bail pleas of the accused, saying if set free, they might influence witnesses and hamper the "multi-layered probe by various agencies in more than one jurisdictions involving several countries".

"We have evidence where the meetings unofficially took place for the purpose of crime. At this stage, please do not entertain their bail pleas. Let the probe be completed," he said, seeking dismissal of the bail pleas of all the three accused and adding that the matter has "tarnished country's name".

On the court's query whether the CBI had any material regarding S P Tyagi receiving money, the agency told the court that the former IAF chief had purchased several properties for which the sources of income were not disclosed by him and alleged that he had abused his official position.

Advocate Pramod Kumar Dubey, counsel for Khaitan, had also countered CBI's argument, claiming that the agency was trying to sensationalise the matter and there was no allegation that his client had not joined the probe or tried to influence it.

Sanjeev Tyagi's counsel Manav Gupta also opposed CBI's contention saying there was no reason to claim that if granted the relief, his client would hamper the probe. The accused sought bail on the grounds that the evidence was documentary in nature and had already been seized by CBI and they have cooperated with the probe agency.

The court had on December 17 sent all the three accused to judicial custody till December 30.

71-year old Tyagi, who had retired in 2007, his cousin Sanjeev and Khaitan were arrested on December 9 by the agency in connection with the case. The case relates to procurement of 12 VVIP choppers from UK-based firm during the UPA-2 regime.

The accused have alleged that the "CBI was trying to extract the confession using force". The defence counsel had also claimed that there was no apprehension of them fleeing from justice or tampering with evidence.

The CBI had said it was a "very serious" and "a very high-profile" case requiring interrogation to unearth larger conspiracy as the "interest of the nation was compromised".

It had submitted that "one part of the crime was committed in India while various other angles are in foreign land."

Tyagi's counsel had earlier claimed that the decision to procure VVIP choppers from AgustaWestland was a "collective" one and Prime Minister's Office (PMO) was also a part of it.