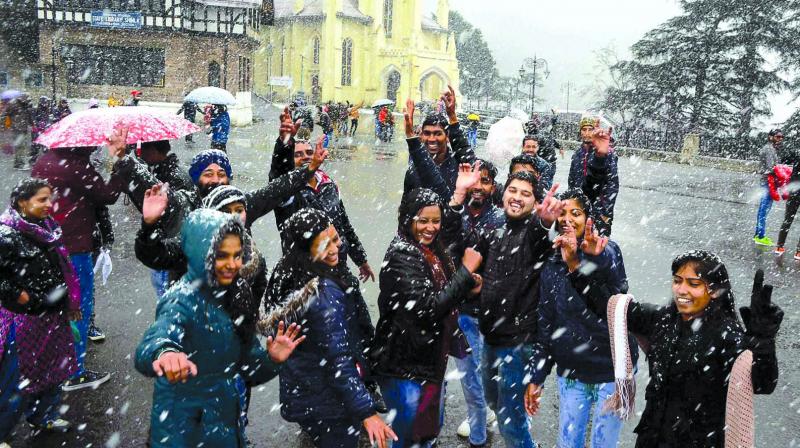 Tourists enjoy the first snowfall of the season in Shimla on Christmas. (Photo: PTI)

New Delhi: Himachal Pradesh and Uttarakhand had a ‘White Christmas’ on Sunday as they received the season’s first snowfall, which coupled with rain pulled down the mercury in northern region, including Delhi, even as dense fog led to accidents in Uttar Pradesh which claimed at least seven lives.

The dry spell of weather continued in Jammu and Kashmir with most of the state reeling under sub-zero temperatures, while rains in Haryana and Punjab brought down the mercury in the region.

In HP, Shimla and its surrounding areas received slight traces of snowfall before showers lashed the region, while the adjoining tourist resorts of Kufri, Fagu and Narkanda had light snowing.

This is the first time after 25 years, that Himachal received snowfall on Christmas day, officials said. Kalpa in Kinaur district received 7cm of snow while Kufri and Narkanda had 2cm and 5cm of snow, respectively. Shimla had 1cm rains, while Solan, Kangra and Dharamsala received 6 mm, 2 mm and 5 mm of rains, respectively.

The sky remained heavily overcast with high velocity chilly winds sweeping the region, causing drop in mercury. Uttarakhand’s hills received the season’s first snowfall on Christmas while the lower areas were lashed by moderate showers causing a sharp dip in temperatures across the state.

Places located above 3,000 metres in state’s Chamoli, Rudraprayag and Uttarkashi districts including the four Himalayan shrines of Badrinath and Kedarnath received the season’s first snowfall even as the plains including Haridwar, Udham Singh Nagar and adjoining areas were swept by icy winds and light drizzle. Yamun-otri, Gangotri, Harkidoon, Radi and Baukh Dibba were also lashed by heavy snowfall, their first spell this winter.