India   All India  26 Dec 2018  ‘MP results were close because of selective EVM rigging’
India, All India

‘MP results were close because of selective EVM rigging’

Kamal Nath is one person who thinks globally but acts locally. And that’s a good thing. It was the reverse with Shivraj Singh Chouhan. 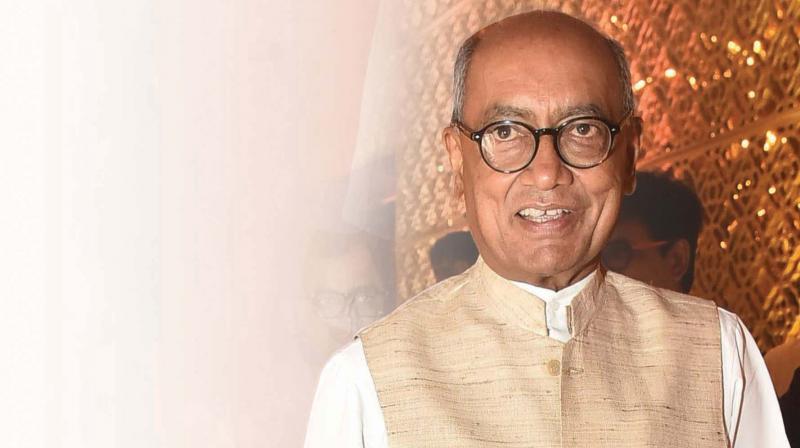 He may have been sidelined by Congress president Rahul Gandhi but senior party leader and former Madhya Pradesh chief minister Digvijaya Singh has proven that he cannot be wished away. He is well connected with party cadres and, as he himself says, knows the state like no one else. Having played a key role in these Assembly polls and enjoying the support of a large chunk of the newly-elected MLAs, Mr Singh is the proverbial power behind the throne. Excerpts from an interview with ANITA KATYAL

Q: The Congress won in Madhya Pradesh but just about. Did you expect such a close contest?
I did not think the result would be this close. My own expectation was that we would get somewhere around 126-132 seats. I had done a detailed analysis of all the seats and it would have been correct but for the results in Vindhya Pradesh.

Of the 27 seats here, we got only seven and of the seven seats in Mandsaur region — the epicentre of the farmers’ protests — we won only one while we were expecting four.

Q: Isn’t that unusual? The Congress should have swept this region.
I agree. This was most unusual and unexpected. I had analyzed all the seats and, even on polling day, everyone said we were sweeping here. All the exit polls said the same. So the result was really surprising.

Q: What happened… how did this result come about?
My age-old theory is of selective rigging through EVMs by the BJP. They do it every time but they do it selectively. The BJP did the same in Gujarat. We were sweeping Surat, Rajkot and Baroda but in the end, you know what happened.

Q: The BJP says when the Congress wins, it forgets the EVMs but remembers when it loses.
I’m not forgetting… in fact, I’m reminding them.

Q: The BJP managed to do very well even after 15 years in power. Was it because of Shivraj Singh Chouhan’s popularity, the BJP organisation or the RSS cadre?
The BJP owes its performance to the RSS cadre. What is Shivraj Singh Chouhan… he’s only its face. Of the three chief ministers, only Shivraj Singh Chouhan comes from the RSS ranks. Raman Singh and Vasundhara Raje have not come from the Sangh. So Madhya Pradesh became a nursery of the RSS and it has developed deep and strong roots in the state. Shivraj merely toed the RSS line.

Q:  You kept a very low profile in these elections. Was it deliberate or were you asked to do so by the leadership.
No, no one asked me to keep a low profile, it was voluntary. You see, I know my strengths and weaknesses.

My strength is that I know the state of Madhya Pradesh like no one else does. And for the last one year — since September 2017 — I have spent more time in MP than any other leader. That’s my strength.

Q: And your weakness?
Being Digvijaya Singh himself.

Q: You are being described as a kingmaker as you played a key role in these elections.
First of all, I have to say I am not a kingmaker. And second, historically, I know the fate of all kingmakers; he’s the first casualty. No king wants to have a kingmaker by his side.

Q: It’s well known you pushed for his appointment as the PCC chief and then as the chief minister.
I did not push for him. I was asked my honest opinion and gave it in favour of Kamal Nath. I believed he was better because he has more experience and would also have larger support of the workers.

Q: Kamal Nath is temperamentally very different from Shivraj Singh Chouhan who was low-key, humble and accessible. How will Kamal Nath fare as he is not a people’s person?
Kamal Nath is one person who thinks globally but acts locally. And that’s a good thing. It was the reverse with Shivraj Singh Chouhan. He thought locally but acted globally. Recall how he went to international investment summits to the US where he claimed the roads in Madhya Pradesh were better than those in America.

Q. There is constant talk about your testy relationship with Jyotiraditya Scindia. How do you respond to this chatter?
I have no problems with Jyotiraditya Scindia. I was the one who brought his father — Madhavrao Scindia — into politics way back in 1979-80. We come from the same region. I had suggested to Arjun Singh and Sanjay Gandhi that we should get him on board.

Jyotiraditya is like a son to me. After all, I am a contemporary of his father. Both Madhavrao and I worked very well together. We would sit across the table and resolve all issues.

I have no issues with the young man. He’s bright, young, articulate and has a lot of charisma. He is no doubt a future leader.

Q: What next for you… will you contest the 2019 Lok Sabha election?
My role will be decided by the Congress president. I met him a few days ago but we did not discuss my future plans. I have never asked for anything.

I am at the mercy of my leader. I have contested nine elections and won eight. I have no problem contesting the Lok Sabha election.

But it is for the Congress president to decide how he wants to use me.

Q: What do these Assembly elections mean for the 2019 Lok Sabha polls and the way forward for the Congress?
My own understanding of the state and national elections is that the voter has become very smart. It is not necessary that the voter will vote in the national election as per his or her state preference. Take the example of 1998 when the Congress fared badly in the parliamentary election but later that year got a majority in the states.

The reverse happened in 2003-2004 elections. So we cannot predict the 2019 election on the basis of the recent results in the three states.

People are now getting fed up of the BJP’s communal agenda. Even their hardcore supporters are having second thoughts and asking what kind of religion they are talking about.

You have reached a stage where we are discussing whether Bajrang Bali was a Jat or a Dalit.

Q: It appears it’s the Congress which is having second thoughts. Rahul Gandhi’s temple run gives the impression the Congess is the BJP’s B-team.
No, no you are absolutely wrong.

The Congress Party is not anti-religion. We respect the right of every person of this country to follow the faith and religion he or she wants to. We do not want to impose any one religion on the people. That’s what the BJP and the RSS are doing. It is not competitive but collaborative.