Roy said that officials would visit people’s homes under NPR exercise for taking their names, addresses and other details. 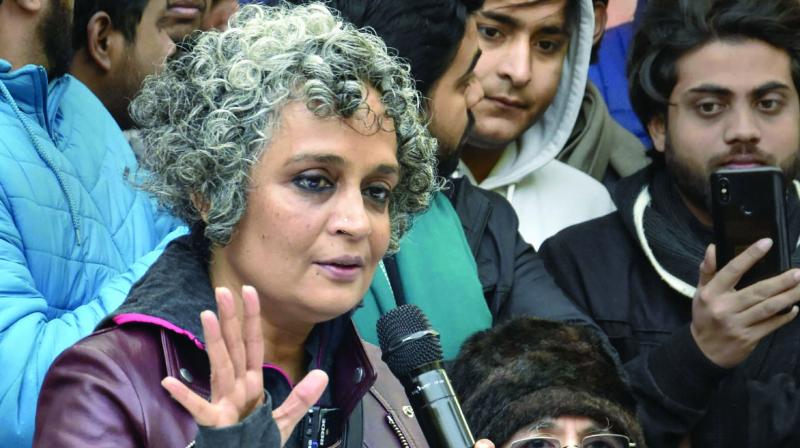 Arundhati Roy during a protest against the amnended Citizenship Act at Delhi University on Wednesday. (Photo: PTI)

New Delhi: Stoking a fresh controversy, author and activist Arundhati Roy on Wednesday said when officials come to collect details for the National Population Register (NPR), people should provide them false details about their name and address.

Ms Roy said this while taking part in a protest in New Delhi against the Citizenship Amendment Act and the proposed all-India National Register of Citizens (NRC).

“When officials visit your home for NPR and ask you your name, give them names like Ranga-Billa, Kungfu-Katta,” Ms Roy said during a protest organised at Delhi University. She said people should cite 7 Race Course (the Prime Minister’s residence) as their address and should agree on a mobile number that everyone will provide to the officials. She said that the NRC was targeted against the Muslims of India.

Ms Roy said that officials would visit people’s homes under NPR exercise for taking their names, addresses and other details. “They will visit your homes, take your name, phone number and ask for documents like Aadhaar and driving licences. The NPR will become database of NRC…We need to fight against it and have a plan. When they visit your home for NPR, and ask for your name give them some different name. For address say 7 RCR. A lot of subversion will be needed, we are not born to face lathis and bullets.”

Ms Roy accused Prime Minister Narendra Modi of telling a “lie” at his Ramlila Ground rally on Sunday that his government never said anything about the NRC process and that there are no detention camps in the country. “He told the lie knowing that it will be caught but still he lied because he has media with him which will not question him. Those protesting against the amended Citizenship Act and the NRC need to work for getting a proper commitment from various states that they will not implement these measures.”

Ms Roy alleged that after widespread protests against the CAA and NRC in the country, the government has been trying to push the provisions of NRC and CAA through NPR. Alleging that Muslims are being attacked and oppressed by the police in Uttar Pradesh, she claimed, “Attacks are taking place on Muslims in UP. Police are going house to house ransacking and looting.  CAA and NRC were not only against Muslims but also against Dalits, tribals and poor people in the country.”

The protest organised by Joint Committee For Action Against CAA/NRC, was also addressed by other members of civil society including Bollywood actor Zeeshaan Ayyub, who said that the students and youth of the country were fighting for a right cause and they will achieve success through their struggle.

Union home minister Amit Shah has already said there was no link between the NPR and the NRC and their databases cannot be used for each other. The Union Cabinet on Tuesday approved `3,941.35 crore for updating the National Population egister(NPR). The NPR is a list of “usual residents” of the country.