Hemant Soren meets Sonia Gandhi to invite her for oath 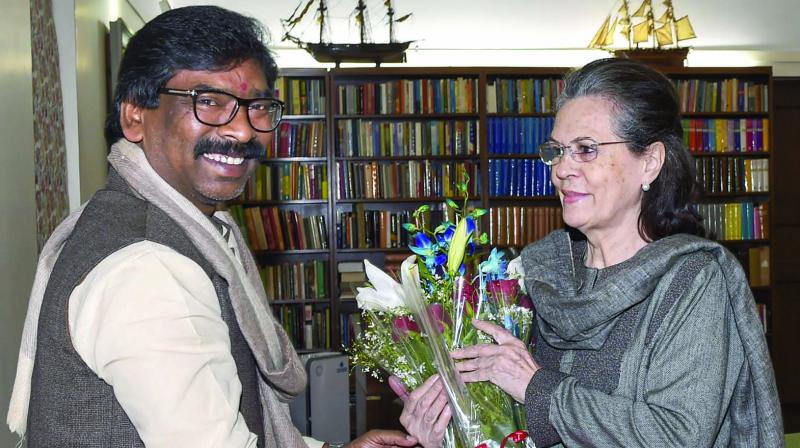 New Delhi: After securing a clear majority for the JMM-Congress-RJD alliance, Jharkhand CM-designate Hemant Soren met Congress president Sonia Gandhi in New Delhi on Wednesday evening. “I am leaving for Delhi today, to invite Congress leaders Sonia Gandhi Ji, Rahul Gandhi Ji and Priyanka Gandhi Ji for the oath-taking ceremony on 29th December,” he said. The Congress, which had a pre-poll alliance with Mr Soren’s Jharkhand Mukti Morcha, will also be a part of the new government in the state.

After meeting Mrs Gandhi, Mr Soren said: “I had come to invite the Congress president, and she has assured me that Rahul Ji will come to the swearing in.” The JMM working president was accompanied to 10 Janpath by Congress leaders K.C. Venugopal and R.P.N. Singh, who is the party’s in-charge for Jharkhand. Mr Hemant Soren on Tuesday met Jharkhand governor Droupadi Murmu and staked his claim to form the government, accompanied by leaders of the Congress and the RJD.

The alliance, which won 47 seats in the 81-member Assembly in the polls, has also secured support of former ally Jharkhand Vikas Morcha-Prajatantrik led by Babulal Marandi.

Mr Soren was elected leader of the alliance at a meeting of MLAs at the residence of his father and JMM president Shibu Soren on Tuesday night.

Insiders say the division of portfolios has been decided between the alliance partners.