Rahul also attacked PM Modi, asking him how he could be in an alliance with the Badals if he had declared a war on corruption. 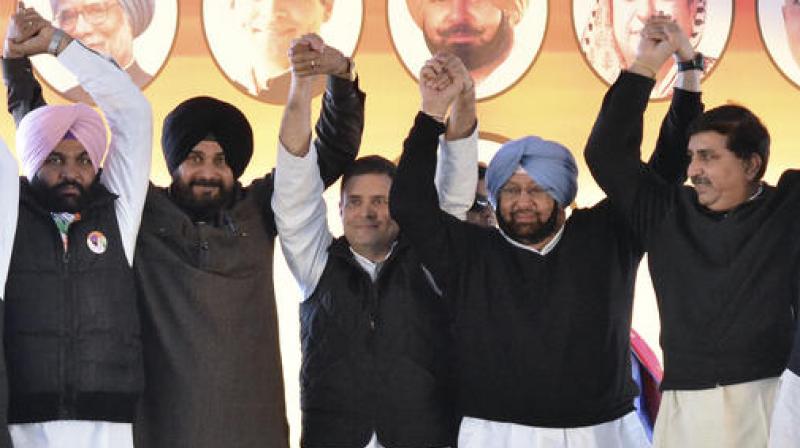 Rahul also stated that the Congress, if it came to power, would be able to ensure that the next CM of Punjab would come from the state itself. (Photo: AP)

Speaking at a rally in Majitha in the state, Rahul ended speculation over the Congress’ CM face for Punjab by naming Amarinder Singh.

Claiming that he had been vindicated in his statement made years ago that 70 per cent of the state’s youth was addicted to drugs, the Congress VP said that the whole state acknowledges this now.

Accusing the Badals of neglecting the plight of farmers in the state, Rahul said the ruling dispensation does not care even to provide water to the farmers. He also alleged that the Badal family had established a monopoly over all industries in Punjab.

Rahul promised to fight a war against drugs if Congress came to power in the state, adding that a new and tough law would be introduced for the purpose.

He also asserted that ‘those who have wounded Punjab would be put in jail’.

Invoking Guru Nanak, Rahul claimed the Badals had disrespected his teachings through their selfish behaviour.

Attacking Prime Minister Narendra Modi, Rahul Gandhi demanded to know of the PM as to how his party the BJP could ally with the Badals, if he had declared a war against corruption.

Rahul also stated that the Congress, if it came to power, would be able to ensure that the next CM of Punjab would come from the state itself.

The Congress VP’s rally in Majitha was also attended by Navjot Singh Sidhu, who just joined the party, and Amarinder Singh.