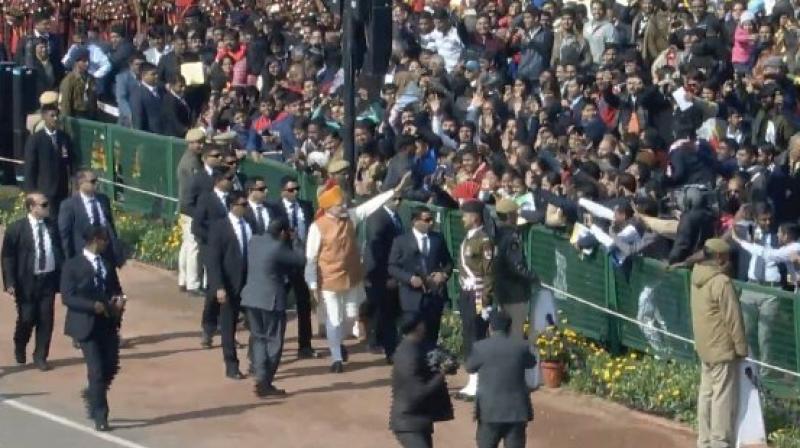 New Delhi: The majestic Rajpath saw a scintillating display of India’s military might and resplendent cultural diversity as the country celebrated its 70th Republic Day on Saturday, with South African President Cyril Ramaphosa attending the event as guest of honour. He was seated next to Prime Minister Narendra Modi who wore his traditional kurta pajama and the trademark Nehru jacket.

Four veterans of the Indian National Army (INA), an all-women contingent of the 183-year-old Assam Rifles marching down Rajpath and an IAF aircraft flying using a mix of traditional and biofuel were among the many firsts this Republic Day.

“Nari Shakti” was on full display on Rajpath when an all-woman Assam Rifles contingent created history by participating in the parade for the first time. It was led by Maj Khushboo Kanwar.

Also for the first time, a lady officer led the Army Services Corps in the parade and the Daredevils Motorcycle Team included a woman officer. Contingents of the Navy, Army Service Corps and a unit of Corps of Signals (transportable satellite terminal) were also led by women officers.

As the main theme of the R-Day parade was Mahatma Gandhi — this year the nation celebrates his 150th birth anniversary — various facets of his life and freedom struggle were on display on 22 tableaux that rolled down Rajpath.

The Indian Railway tableau, an ode to the ties between South Africa and India, depicted the transformation of Bapu from “Mohan to Mahtma” in 1893 when he encountered aggressive discrimination as he was pushed out of a train coach.

Colourfully bedecked camels, a contingent of the Border Security Force, used for patrolling in the Thar Desert region in Rajasthan and Gujarat, strolled down the ceremonial boulevard as bandsmen riding their backs played martial music.

Fifty-eight tribal guests from various parts of the country, 22 tableaux of states and Central government departments, and performance by school children marked the 90-minute parade.

Lance Naik Nazir Ahmad Wani, a militant-turned-soldier who laid down his life fighting a group of terrorists in Shopian in Kashmir in November, was awarded the Ashoka Chakra, India’s highest peacetime gallantry honour, by President Ram Nath Kovind. It was received by Wani’s wife and mother. Wani is the first Kashmiri to be conferred the Ashoka Chakra.

Twenty-six children, including six girls and 20 boys, were awarded Pradhan Mantri Rashtriya Bal Puruskar for their “exceptional achievement”. The children drew cheers from the audience as they passed through Rajpath in open jeeps.

A major highlight of the parade was the participation of four Indian National Army (INA) veterans — Parmanand, Lalti Ram, Hira Singh and Bhagmal, all aged over 90 years — for the first time.

The fighter planes of Indian Air Force stole the show in the end when Sukhoi 30, flying at a speed of 900 kmph, split the sky with a “Vertical Charlie”. Other aircraft that participated in the flypast were MiG-29 Upgrade Air Superiority Fighters and AN-32 aircraft, which used biofuel for the first time in India.

After seeing off President Ram Nath Kovind, Prime Minister Modi took a walk on the Rajpath and greeted people who had lined up the ceremonial boulevard.

For the Republic Day parade, the national capital turned into a fortress. SWAT women commandos, mobile hit teams, snipers and around 25,000 police personnel, including traffic officials, formed the various layers of security on ground. Anti-aircraft guns were put in place to secure the airspace and CCTV cameras and face-recognition cameras were also installed at Rajpath. Counter-drone technology to thwart any attack or identify any suspicious flying object was also deployed.