The trajectory of modern and contemporary dance in India has travelled in many directions and loop-de-loops over the years. 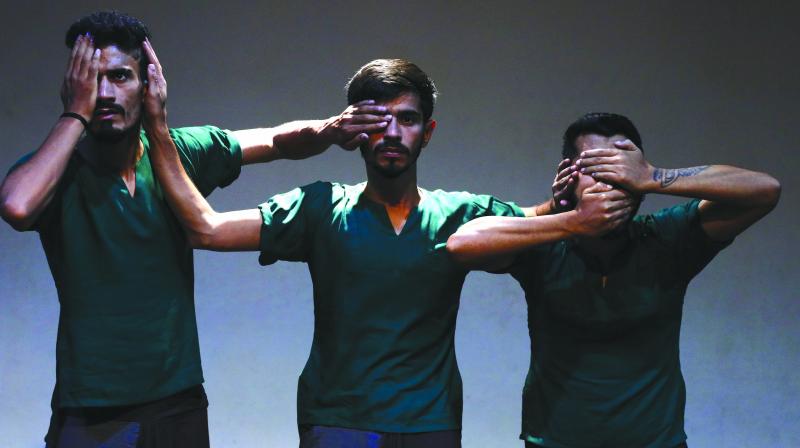 Modern and contemporary, in reference to concert dance, are not always synonymous.

The trajectory of modern and contemporary dance in India has travelled in many directions and loop-de-loops over the years. Modern and contemporary, in reference to concert dance, are not always synonymous. The iconoclastic movement expressions legendary 20th century pioneers in the West evolved further identified as postmodern, post-postmodern and now the label, contemporary, can refer to any or all of these, including popular commercial forms.

While Uday Shankar is the acknowledged father of Indian modern dance, other early influences came to India, including the 1955 Martha Graham tour and even pre-WWII Jewish dancer refugees.

What grounding a modern dance performer and/or choreographer has in training and culture will naturally shape their understanding and use of space, time, motion and energy. Bharat Sharma holds a particularly unique place in that he has equally thorough grounding in the Uday Shankar tradition, being born in a family of dancers and groomed by his father, Narendra Sharma and performing over 18 years as part of Bhoomika, as well as years of modern dance, ballet and jazz techniques in NYC’s Nikolais/Louis Dance Lab, Ruth Currier Studio and from the Jacob’s Pillow and North Carolina American Dance Festivals. On top of this, he also received thorough foundation in Mayurbhanj Chhau under Krishna Chandra Naik and Kathakali under Sadanam Balakrishnan.

I was thrilled to be able to see Bharat’s recent work presented at his Narenjayan Studio in celebration of his father’s 96th birth anniversary and, more recently, on the 12th anniversary of his passing. Tigdi, with 11 sections performed by a trio covered a vast array of images, emotions and techniques. It is not unusual to see classical dancers using abhinaya as they expand into a contemporary movement vocabulary, but Bharat is exceptional in his use of abhinaya coming out of his Indian modern dance ethos. We see three dancers exploring male bonding, teamwork, their respective journeys and training as dancers, violence, daily in-life tensions and even Gandhi’s three monkeys. Without a storyline, we experience a dance and theatre kaleidoscope with a range of movement sequences developed through improvisation with dancers.

Subhasish Dey, the senior dancer in Tigdi, contributed to evolving a movement architecture of the piece. Trained by Sangeeta Sharma, an alumni of Bhoomika Creative Dance Centre, he also drew on his background in Kalari, yoga, Mayurbhanj Chhau and contemporary dance. The other two in the trio, Umesh Bisht and Tushar Yadav, learned Bharat’s technique of contemporary/modern dance and his father’s principles of choreography over six years along with Mayurbhanj Chhau and yoga.

It’s also worth noting that the music track of Steve Reich’s Music of 18 musicians was the inspiration for this from the time Bharat heard it performed live in 1982 with its structures of 3, 6, 9 and mesmerising layering. Versions he’d seen by US modern dance companies were more explorations in abstract movement in space while Bharat was motivated to try to explore the moods, emotions, orchestration and structures for dramatic intent, truly bringing out his roots in Indian modern dance.

Bharat presented the Delhi premiere of a solo performance piece tribute to Hindi poet S.H. Vatsyayana, Agyeya, after Tigdi, and later as the centrepiece of his Teen Adhyaya evening of solo choreographies. S.H. Vatsyayana was connected with the national movement and was a formidable influence on Delhi’s literary and cultural life in the 1960s and 1970s. Bharat works through select poetry in the writer’s voice on various facets of his life’s journey and creative insights with an idea of exploring time, place and coincidence — since both Uday Shankar and S.H. Vatsyayan had Almora as common in terms of artistic inspiration. Wonderful gravitas was created by Zia Moinuddin Dagar’s rudra veena background track.

Bharat spoke about the creative process: “I was very moved by his last poetry naach — a description of a dancer dancing between two poles on a tight rope, lit by a lamp, and his relationship with the audience. This was written in the 1960s in Delhi, and its most apt description of what we have come to know as ‘contemporary dance’ — of being an individual in his/her context and culture, and the struggle to communicate and reveal the self to the viewer. Choreography is an attempt to use contemporary Hindi poetry as a base for dramatisation and explore modern ‘abhinaya’.”

Entering his Teen Adhyaya solo program a few minutes late, I recognised the evocative sthai chali of dandi from Mayurbhanj Chhau, as taught to us by our Guru Krishna Chandra Naik. Then I saw that the dance was actually entitled Dandi as a tribute to Mahatma Gandhi on his 150th birth anniversary with reference to his seminal Dandi March (Salt Satyagraha). Both have similar ideas of departure and renunciation and Bharat’s spaciously paced choreography brought out all our emotions of the iconic walk, staff, sandals and import of Gandhi’s sthai chali as profoundly as that created in the Chhau Dandi.

The recent presentation Artfully Walking with Gandhi by Professor Sumathi Ramaswamy, which I caught in Kolkata after missing it in New Delhi, explored the two dimensional artistic representations of this theme. We all know how important it is to take personal inspiration from Gandhi rather than distancing ourselves by putting him on a pedestal. Bharat’s tribute offered a very human contemplation.

Neti! Neti! rounded out the three solos evening evolved over the last six years. It was a witty exploration of the ancient Indian philosophical system of arriving at a belief through negation — Not this! Not this! Not that…which makes an argument to conduct a discourse to reflect on contemporary issues.

Since the 1970s I have believed that Bharat Sharma had what it takes to bring an authentic voice to Indian modern dance when so many others were derivative, lacking proficiency or maturity of expressive intention. It’s a pleasure and relief to see him contributing his vision, teaching and choreography to the panorama of Indian performing arts.