EU to vote on anti-CAA resolution 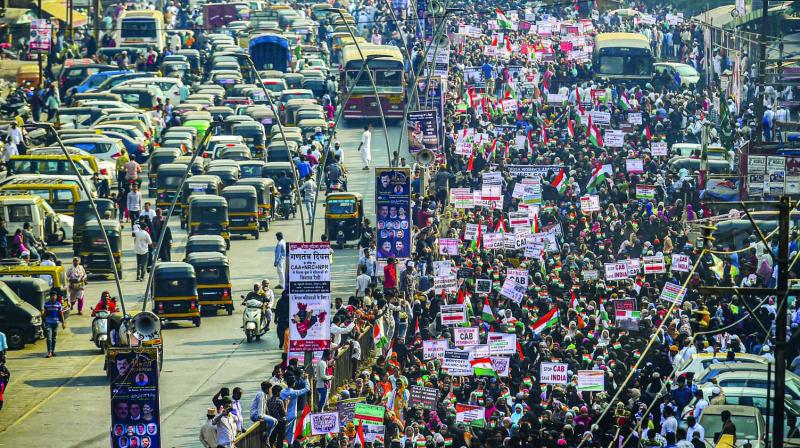 Muslim women participate in a protest rally against the NRC and CAA at Mumbra, near Thane, on Sunday. (Photo: PTI)

New Delhi: With reports that the European Parliament is set to debate and vote on a resolution tabled by some of its Left-wing members against India’s Citizenship Amendment Act (CAA), which it says marks a “dangerous shift” in the country’s citizenship regime and has “created the legal grounds to strip millions of Muslims of the fundamental right of equal access to citizenship”, Indian government sources late on Sunday evening said that “the EU Parliament should not take actions that call into question the rights and authority of democratically elected legislatures in other regions of the world”.

Alarm bells have begun ringing in New Delhi over the proposed discussion on CAA in the EU Parliament.

Hoping that “sponsors and supporters of the draft will engage with us to get a full and accurate assessment of the facts before they proceed further”, Indian government sources added that “every society that fashions a pathway to naturalisation, contemplates both a context and criteria (and that) this is not discrimination”, adding that “European societies have followed the same approach”. Government sources said that the CAA is a “matter that is entirely internal to India” and that “this legislation has been adopted by due process and through democratic means after a public debate in both Houses of Parliament.”

According to news agency reports from London, the resolution tabled by the European United Left/Nordic Green Left (GUE/NGL) Group in the Parliament earlier this week which falls under the category of “Resolutions on topical subjects”, is set to be debated next Wednesday and voted on the day after. The resolution also alleges that the CAA could be used, along with the National Register of Citizens, to “render many Muslim citizens stateless”.

The draft resolution reportedly states, “The CAA marks a dangerous shift in the way citizenship will be determined in India and is set to create the largest statelessness crisis in the world and cause immense human suffering.” “Instead of addressing the concerns, offering corrective action, calling for security forces to act with restraint and ensuring accountability, many government leaders have been engaging in efforts to discredit, rebuke and threaten the protesters,” it notes.