22 tableaux took part in the parade. Bengal, Kerala and Delhi were not represented. 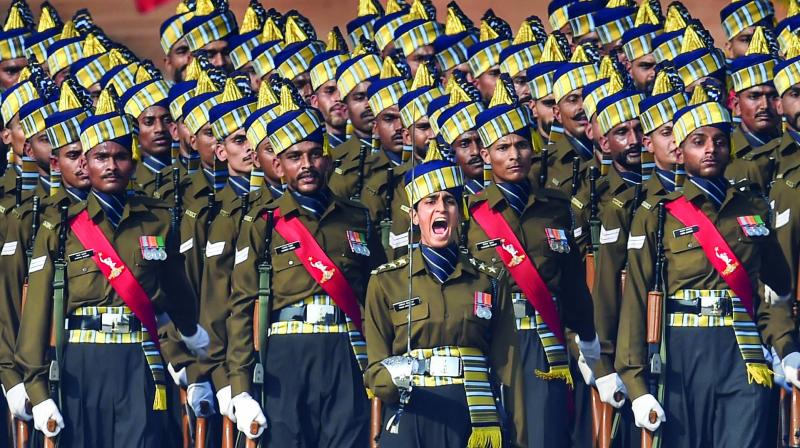 NEW DELHI: The 71st Republic Day parade on Sunday showcased India’s cultural diversity, as well as military prowess with many firsts this year as hundreds of men, women and children wrapped in thick woollens, braved the winter morning chill to watch the annual ceremony at the majestic Rajpath.

A blanket of thick fog that engulfed the city in the morning and tight security restrictions could not deter the enthusiastic crowd from gathering at Rajpath, or the King’s Way — a ceremonial boulevard that runs from Rashtrapati Bhavan on Raisina Hill to India Gate.

The parade, an impeccable showcase of India’s military might by the armed forces and soft power by its dancers, singers and artists, was attended by President Ram Nath Kovind, Prime Minister Narendra Modi, and the chief guest, Brazil President Jair Messias Bolsonaro.

Mr Modi, sporting a saffron turban received Mr Bolsonaro at the ceremony. This was the third time that a Brazilian President graced the Republic Day parade. Previous instances were in 1996 and 2004.

The parade this year was marked by several firsts, starting with Mr Modi paying homage to soldiers killed in battle at the National War Memorial, instead of the Amar Jawan Jyoti at India Gate, where he was met by the newly appointed Chief of Defence Staff Bipin Rawat, Indian Army Chief Manoj Mukund Naravane, Navy Chief Karambir Singh and Air Force chief R.K.S. Bhadauria.

The memorial, which was inaugurated in February last year by the Prime Minister himself, is dedicated to soldiers killed in battle after Independence — the Indo-China War in 1962, Indo-Pak wars in 1947, 1965 and

1971, Indian Peace Keeping Force Operations in Sri Lanka and in the Kargil Conflict in 1999, and also those in UN peacekeeping missions.

Among the other firsts in the celebration was the display of Chinook and Apache helicopters in the fly-past and showcasing of the A-SAT weapons system. The Chinooks can airlift diverse loads in remote locations and the Apache is a versatile helicopter capable of firing air-to-air and air-to-ground missiles, rockets and front gun aided through fire control radar that can unleash havoc on the adversary.

In all, 22 tableaux participated in the parade. Jammu and Kashmir, which participated for the first time as a Union Territory, had the “Back to Village’’ theme for its tableau.

An all-woman bikers contingent of 65 Central Reserve Police Force officers performed nine stellar stunts on 18 Royal Enfield Classic 350s at the grand event. Leading the CRPF Mahila Bike Team was inspector Seema Nag who is posted with the Rapid Action Force (RAF).  Marching for the first time in the parade was a contingent of the Corps of Army Air Defence that was recently awarded colours by the President of India.

A year after India successfully tested ASAT (anti-satellite) missile in March by shooting down its own decommissioned satellite, the Defence Research and Development Organisation was represented by an ASAT tableau in this year’s parade for the first time.

In another first, Dhanush artillery — a towed Howitzer designed indigenously by the Ordnance Factory Board — was seen at the Republic Day parade.

The finale, one of the most keenly awaited segments of the parade, was marked by a breathtaking fly-past that too saw many new elements. For starters, there were three Advanced Light Helicopters — one each from the Army, Navy and Air Force flying past the saluting dias in a “tri-service, or trishul formation.” This was followed by a “Vic” formation of Chinook helicopters.

Upgraded MiG 29s and the French-British made deep penetration strike Jaguar aircraft too took part in the fly-past.