Dharm does not mean praying rituals or worship pattern but to take everyone along, said Bhagwat. 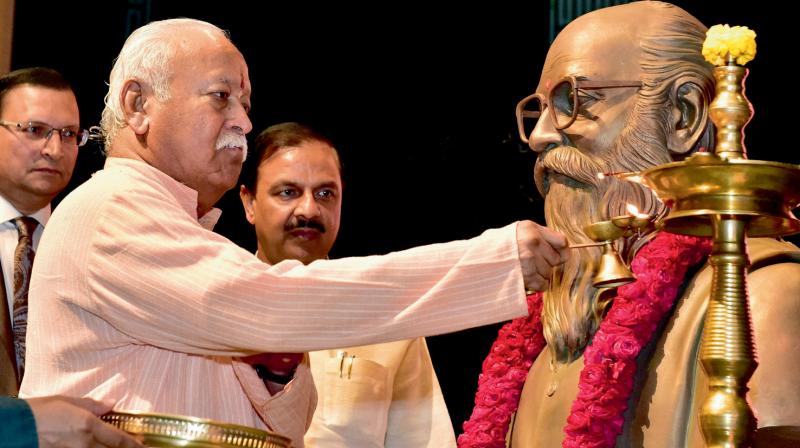 He said ‘dharm,’ does not mean praying rituals or worship pattern but to take everyone along. The theme of the lecture was ‘Indigenous model of development; integral humanism.’

Interestingly, sangh parivar chief’s remarks made at the seventh Nanaji Deshmukh Memorial lecture, came on a day when one of the sangh affiliates, VHP’s Pravin Togadiya released ‘Hindu First,’ a document of 12 demands. These demands included construction of Ram mandir, implementing of a Union Population Law, employment of “every Hindu youth: buy from Hindu, hire Hindu,’ appointment of an IPS officer at each district for ‘Hindu safety from Jehadi and similar Muslim assaults and attack on Hindus’ and passing of the Uniform Civil Code.

In Ahmedabad to attend a ‘Hindu Sammelan,’ Mr Togadiya asked government to stop all subsidies provided to the Muslim community from “Hindu tax payers” or provide same grants to the Hindus as well. He said Hindus are “facing injustice, insecurity, losses and secondary citizen treatment’ despite being the majority” and asked them to be “an active and alert Hindu.’

Addressing the gathering at Parliament library building, Mr Bhagwat said ‘sabka saath sabka vikas’ is actually a declaration of country’s ‘dharm’ and will be achieved only when the life of the last man standing in the queue is improved.

He said this it what Mahatama Gandhi and RSS ideologue Deendayal Upadhyaya had wanted despite following different ideologies as they believed in the same dharm. Quoting Swami Vivekananda, Mr Bhagwat said the great philospher had said that until ‘Bharat’ has its ‘dharm,’ no harm can come to it.

He said like nations, which are united by their language or economic policy, India is united by its ‘dharm,’ which binds everyone despite disparities. He said one who follows the ‘dharm,’ protects the ‘dharm’ of others.