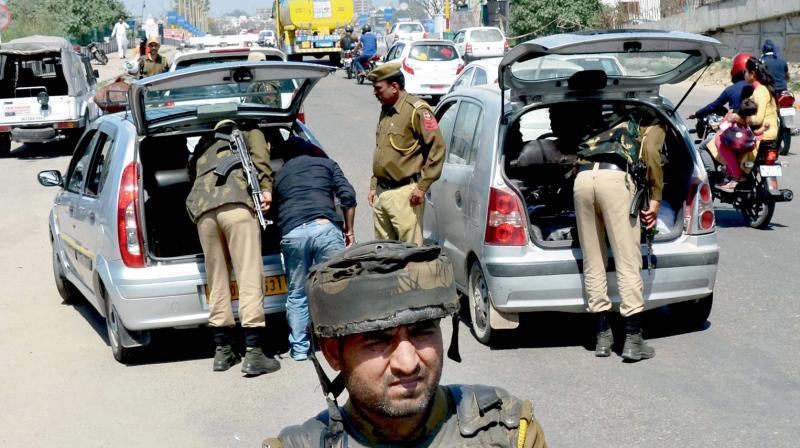 Policemen conduct a search operation in Jammu and Sunday after three youth attacked the personal security officer of a cleric and snatched his AK-47 rifle. (Photo: PTI)

Srinagar/Jammu: Militants carried out two attacks on police forces in Jammu and Kashmir late Saturday night, pushing the state to a high alert days ahead of Prime Minister Narendra Modi’s visit and the upcoming parliamentary by-elections there.

The first incident was reported from Budgam district, which falls under Srinagar parliamentary seat going to polls in the second week of April, where militants barged into the house of a sub-inspector and took his son and a nephew hostage, ransacked the house and set a car ablaze.

The militants drove away in the car with the two boys, and let them off later, setting the vehicle on fire, police said.

The incident came barely three weeks after militants barged into the house of a senior police officer in Shopian in south Kashmir and ransacked his house.

The militants entered the house of sub-inspector M. Subhan Bhat and started ransacking his house in Chadoora area of the district in central Kashmir, official sources said, adding that they later took his son and a nephew as hostage and drove away in the car.

Police said the militants wanted to kill the officer who is currently posted at Baramulla district jail, where separatist leader Masarat Alam is lodged.

In another incident, three boys riding a motorcycle threw chilli powder into the eyes of a personal security officer of a cleric in Jammu, besides hitting him with blunt objects and fleeing with his AK-47 rifle.

A high alert was immediately sounded in Jammu city and security was strengthened in view of the Prime Minister’s visit there on April 2 for the inauguration of the Chenani-Nashri tunnel.

Police arrested two of the suspects — Masood and Shahid — and launched a hunt to track down the third accused, Asif, who fled with the AK-47 rifle.

Masood hails from Shopian district. All the three have a police record of being stone-pelters. The injured constable has been admitted to hospital.