The CM urged party workers to gear up for the 2019 Lok Sabha elections. 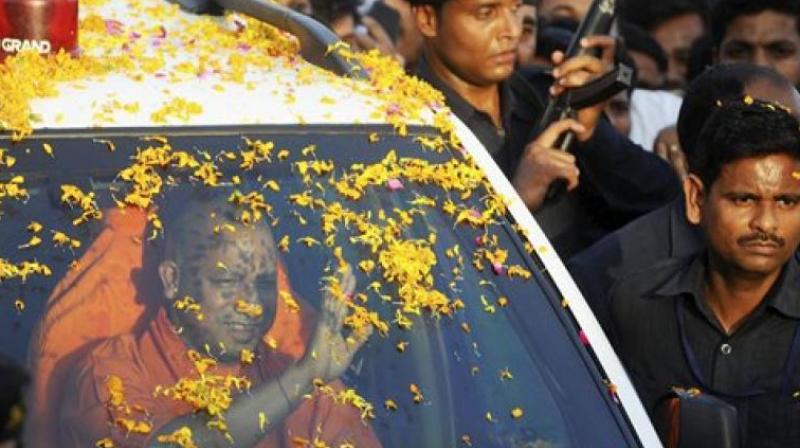 UP Chief Minister Yogi Adityanath arrives at his native place in Gorakhpur, first time after he became CM. (Photo: AP)

Lucknow: Uttar Pradesh chief minister Adityanath Yogi on Sunday warned bureaucrats and politicians in the state to be prepared to work hard and honestly, or leave to “make room for others”.

“We must work 18 to 20 hours a day. There is no time for mauj masti (entertainment),” he said while addressing BJP workers at the party office in Gorakhpur.

“There is no place for those who give patronage to goonda elements, mafia, criminals and other rogue elements. They have the option of leaving UP or else they will land in places designated for them (jails),” he said, while hinting at a revamp of law and order.

Referring to a recent acid attack on a woman from Rae Bareli, the CM said, “The officials are still working on purana dharraa (old style). I went to the hospital to see the woman and asked officials that everything must be done in the next couple of hours.”

The CM also said that criminals who were flourishing under political patronage must now leave the state or face consequences.

He also warned politicians against taking up government contracts (thekedaari), and said that any conflict of interest between politics and business would not be tolerated.

He said that the party did not win the election to enjoy the perks of power but to fulfil the people’s aspirations.

“The post of the CM or a Cabinet minister is not for anyone to flaunt. In fact, it is an indicator of one’s responsibility and accountability towards the public,” he said, pointing towards some ministers present there.

The CM said that his priority would be to provide jobs to the youth and check their migration. He said that he would regularly interact with elected representatives from various regions.

The CM urged party workers to gear up for the 2019 Lok Sabha elections.