However, Muralidhar Rao refuted the allegations and said he has nothing to do with the case. 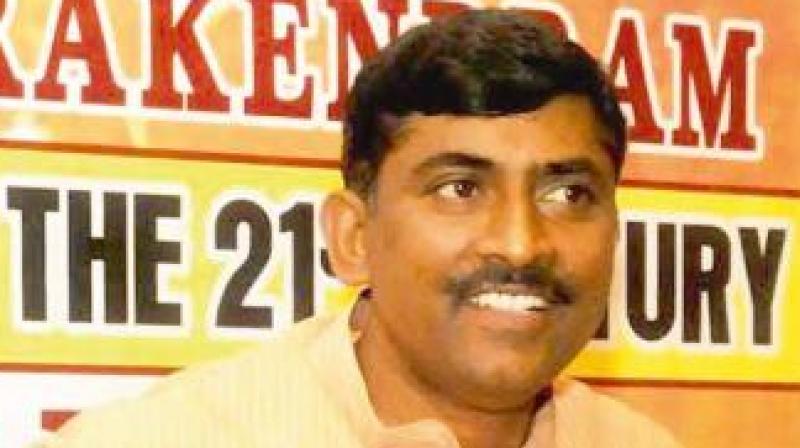 The woman alleged that Muralidhar Rao also started to threaten them. (Image: File)

Hyderabad: An FIR was filed against BJP national general secretary P Muralidhar Rao and eight others for allegedly cheating a man here of Rs 2.17 crore by promising him a nominated post in the central government, police said Wednesday.

However, Muralidhar Rao refuted the allegations and said he has nothing to do with the case. Based on a court-referred complaint lodged by the man's wife, a case was registered Tuesday against Muralidhar Rao and eight others on charges of cheating, forgery, criminal intimidation and other relevant IPC sections, they said.

The complainant alleged that she and her husband were induced by Muralidhar Rao and others by showing a purported letter with forged signature of Union minister Nirmala Sitharaman. She alleged they took Rs 2.17 crore after promising that her husband would be appointed chairperson of Pharma Exil, police said. Denying the allegations, Muralidhar Rao in a series of tweets said, "Regarding the FIR filed - have nothing to do with the present dispute.

The FIR involving me reportedly is sequel to a private complaint in a court by those who actually are facing criminal charges in the same matter." "The timing of the private complaint which has no base is mischievous to say the least. Hope police will act quickly to nail the lies. My lawyers will initiate appropriate steps to bring the culprits to justice," he said in another tweet. In November 2015, Eswar Reddy, who claimed to be closely associated with prominent personalities in the BJP, approached the woman and her husband. Eswar Reddy had said he knew one A Krishna Kishore, the "shadow" of Muralidhar Rao, who was capable of getting a nominated post in any department of the central government, the woman said in her complaint.

The complainant said she and her husband were reluctant to acquire the post by spending a huge amount. "Later, Eswar Reddy and others again approached us and put pressure on us to accept their proposal by making false promises that they would be able to procure a nominated membership of Pharma Exil which functions under the control of Ministry of Commerce and Industries, Government of India," the complainant alleged.

She also alleged that Eswar Reddy and others with the active connivance of Muralidhar Rao showed a photocopy of an appointment letter of her husband as chairperson of Pharma Exil, which was purportedly signed by Nirmala Sitharaman, and took Rs 2.17 crore for the post. When the complainant and her husband approached Eswar Reddy and others over the appointment they dragged the matter and when they sought return of the money there was no response, police said based on the complaint.

The woman alleged that Muralidhar Rao also started to threaten them. Reacting to the FIR, BJP Telangana chief spokesperson Krishna Saagar Rao in a statement said, "The frivolous FIR filed against our National General Secretary Muralidhar Rao by few detractors is with a clear motive to tarnish his image and the party's." Muralidhar Rao's lawyers will take appropriate legal action, he said, adding that "we are very certain that our leader has done no wrong". The BJP also warned of dire legal consequences if anyone conspired against the party.