Congress said that Patra has violated the model code of conduct. 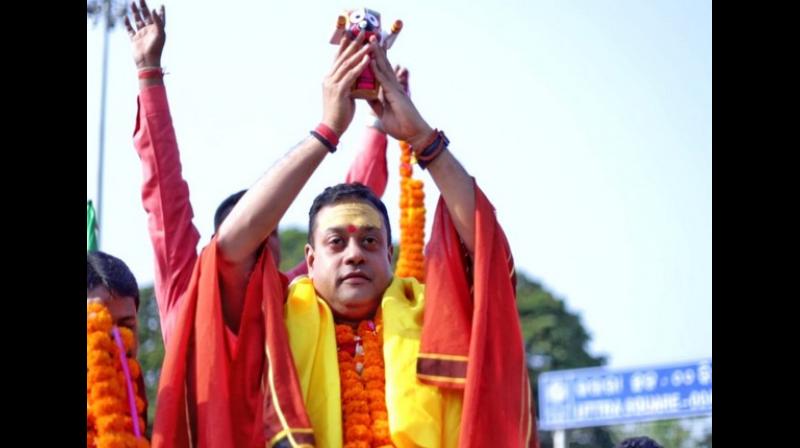 In a petition submitted with the CEO, the Congress said, 'In an election rally, Patra showed and held the idol of Lord Jagannath in his hand and used the photographs of the deity in his social media account.' (Photo: ANI)

Bhubaneswar: BJP spokesman and party nominee for Puri Lok Sabha seat Sambit Patra carried an idol of Lord Jagannath in a vehicle during a rally and it has not gone down well with a section of the temple servitors and the Congress.

The Congress lodged a complaint with the state chief electoral officer (CEO) on Tuesday saying Patra used Lord Jagannath for political benefit and it is a violation of the model code of conduct.

Senior servitor Ramachandra Dasmohapatra said it is against the culture of Odisha.

The BJP leader, however, denied the charges saying someone gifted him the idol during the rally and he only paid his respect to it.

"It is against the culture and tradition of Lord Jagannath to be carried in a vehicle during an election rally," said Dasmohapatra.

During the annual Ratha Yatra festival, Lord Jagannath goes around in a chariot, he said.

In a petition submitted with the CEO, the Congress said, "In an election rally, Patra showed and held the idol of Lord Jagannath in his hand and used the photographs of the deity in his social media account."

"When it has been mentioned by the Hon'ble ECI that no election can be fought on the basis of any religion, caste, creed or culture, the election rally of Dr Sambit Patra and the photograph thereof clearly shows the violation of model code of conduct," state Congress spokesperson Nishikant Mishra said.

Patra, however, rejected the allegation. "Someone gifted me the idol of the Lord during the rally. I held it and paid respect to it. There is nothing wrong in showing respect to my Lord. I am not bothered about what others are saying. Don''t link it with elections," he said.