India   All India  27 Mar 2019  How Pakistan failed to do Balakot-type strike on India on February 27
India, All India

The three locations where the bombs fell are in Poonch and adjoining sectors. 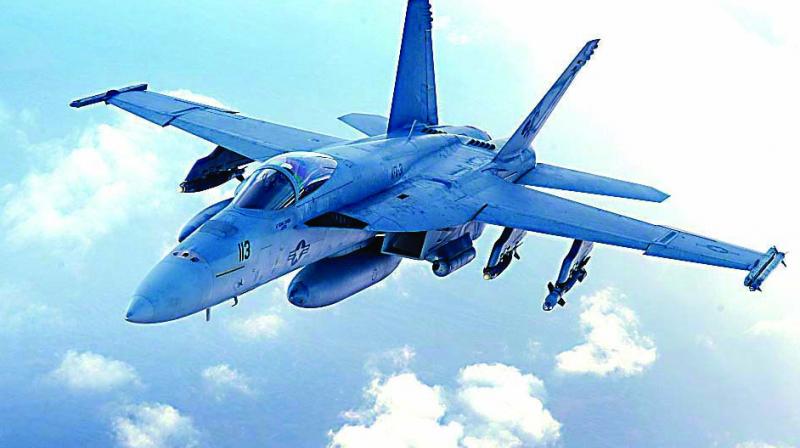 The Pakistani fighter planes had taken off from different bases on February 27 and started gathering over Pakistan occupied Kashmir and their Northern Areas before they turned around to launch attacks on Indian military targets. (Representational image)

New Delhi: A day after the Indian Air Force (IAF) carried out aerial strikes on a Jaish-e-Mohammad (JeM) terrorist camp in Balakot, the Pakistani Air Force tried to carry out a similar attack against Indian military targets but failed to do so.

“On February 27, the Pakistani Air Force with its package of more than 20 planes led by the American F-16s along with the French Mirage-IIIs and Chinese JF-17, fired 11 H-4 1,000 kg bombs from ranges of around 50 kms inside their territory at military targets at three locations but failed to hit any of them,” government sources revealed to ANI.

The H-4 bombs fired by the Mirage-IIIs of the Pakistan Air Force are classified as stand-off weapons which can be launched from a distance to aid in quicker evasive manoeuvres of jets that fire them, similar to the Spice-2000 bombs used by the Indian Air Force in the Balakot strikes. H-4 bombs are made by Pakistan with the assistance of South Africa.

“The H-4s are not very accurate and missed their targets. In one of the attacks on an army camp in Jammu and Kashmir, the building was protected by a tall and thick tree which suffered extensive damage but deflected the Pakistani bomb,” the sources added.

It is learnt that senior officers were present inside the campus when the attacks took place. The three locations where the bombs fell are in Poonch and adjoining sectors. A Board of Officers has been formed to analyse the remains of the Pakistani bombs and other debris from the explosion caused by the bombs.

The government sources speaking on condition of anonymity to ANI due to their close proximity to operational knowledge, speculate that the reason for Pakistani jets missing their targets could be the quick response of Indian jets flying at high speeds to repulse the attack. In haste, the H-4 bombs were let off thereby missing their intended targets.

The Pakistani fighter planes had taken off from different bases on February 27 and started gathering over Pakistan occupied Kashmir and their Northern Areas before they turned around to launch attacks on Indian military targets.

It was during this aggression that Wing Commander Abhinandan Varthaman shot down an F-16 plane using his R-73 air-to-air missile fired from his MiG-21 plane.

Indian Su-30MKIs flying in air defence roles used Chaffs, a tactic of offloading flares to dodge missiles and deft flying manoeuvres to dodge the AIM-20 AMRAAMs fired by the F-16s.