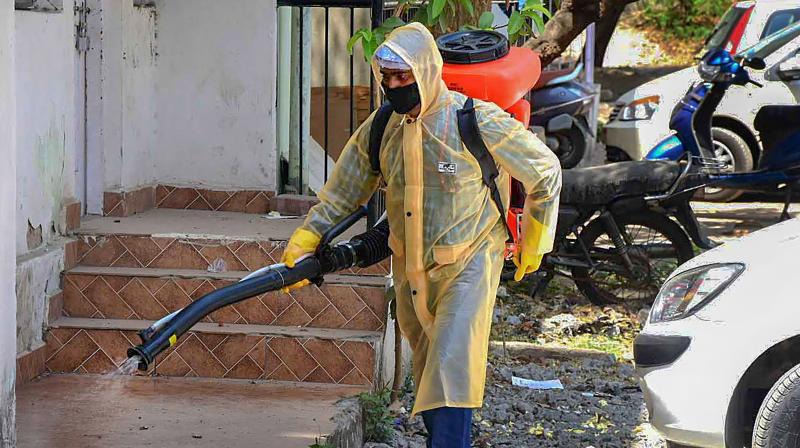 A BMC workers sprays disinfectant in the premises of a residential area to contain the spread of coronavirus during lockdown in Bhopal. PTI image

This was the first death caused by Covid19 in MP.

He was admitted in the local government hospital in Indore on Wednesday night and died a few hours later, an Indore district health department officer said.

However test reports of his sample was still awaited.

Meanwhile, five new positive cases of Covid 19 were reported in Indore in the last 12 hours, taking the tally of confirmed cases in MP to 21.

With this, the number of people who tested positive in Indore alone has gone up to 10.

Meanwhile, the state government on Thursday issued an appeal to all the journalists of Bhopal who attended the March 20 presser of former chief minister Kamal Nath to quarantine themselves in their respective homes after a scribe who attended the news conference tested positive for the virus.

Panic has set in among the journalists here when one of the members of their fraternity tested positive for Covid19.

The scribe’s daughter, who returned from London where she studies law, has earlier tested positive.

Curfew has been imposed in seven districts in MP were corona virus cases were reported. They included Bhopal, Indore, Jabalpur, Gwalior, Shivpuri, Ujjain and Chhatarpur.

Corona virus has cast its shadow over famed Khajuraho shrine in Chhatarpur district with tourists deserting the tourist hotspot this season due to corona virus outbreak.

This was the first time in the history of tourism in Khajuraho, the tourist site has been deserted by the visitors for fear of the virus.

A man hailing from Gwalior who tested positive for Covid19 had visited Khajuraho recently.

In Chhattisgarh, two more people tested positive taking the tally of confirmed cases in the state to three.

Earlier, a woman in Raipur has tested positive for the virus.

Budget session of Chhattisgarh assembly which began last fortnight was on Thursday adjourned sine die due to corona virus outbreak.