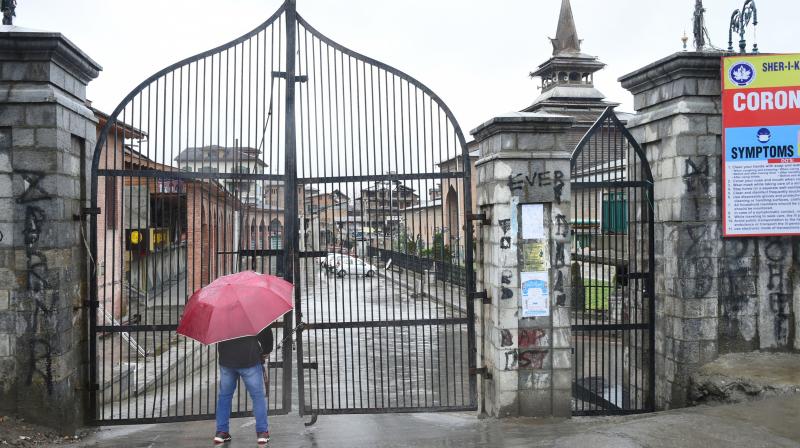 A man walks under a umbrella near the main gate of historical Jamia Masjid locked for the congregational Friday prayers, during 3rd day of the 21-day nationwide lockdown to fight the coronavirus pandemic, in Srinagar. PTI photo

Srinagar: The number of Novel Coronavirus or COVID-19 cases in Jammu and Kashmir went up to 18 on Friday after four more persons, all of them Srinagar residents, tested positive.  Thirteen more persons are being treated for the deadly disease in Ladakh.  One of the affected persons died in a Srinagar hospital on Thursday.

Meanwhile, no Friday congregations were held in any major mosque in J&K or Ladakh. While in most cases the custodians of mosques voluntarily called off the weekly gatherings, the law enforcing agencies had to intervene at place to prevent people from entering the places of worship.

Srinagar’s DC Shahid Iqbal Choudhary had on Thursday with a view to prevent the spread of the virus issued a formal order for the closure of all places of worship in the district. However, the managements of Srinagar’s famed Dargah Hazratbal, historic Jama Masjid and Khankah-e-Naqashbandia had already shut these for worshippers.

The custodians of City’s Chattipatshahi Gurdwara followed the suit whereas revered Hindu shrine of Mata Vaishno Devi tucked away in Trikuta hills near Jammu was closed for pilgrims last week.

The virtual lockdown as part of an official effort to stem the spread of COVID-19 was strictly enforced on ground by the J&K police and Central armed police forces on the ninth consecutive day on Friday. Around Noon, adhan or azaan (call for prayers) was given from some locality mosques in Srinagar and some other towns of the Valley. The police immediately rushed in but were assured by the custodians of these mosques that no Friday congregations are being organized at these.

However at few places, the police had to act tough in order to prevent worshippers from relocating to mosques. Ghulam Nabi Najar who works at a Srinagar newspaper office said that he and some others stood at distance in a mosque deep inside City’s congested Maisuma to offer Dhuhr or Zuhr (midday) prayers instead of Juma namaz.  On Fridays, the Zuhr prayer is replaced by Juma Namaz which is obligatory for Muslim men who are above the age of puberty and meet certain requirements and is to be offered in congregation either in a mosque or with a large group of Muslims.

At least, two imams were arrested by the police after they started delivering sermons before handfuls of worshippers at two Valley mosques, the police sources said adding that several other people were booked for violating the lockdown elsewhere.

A statement issued by the government in winter capital Jammu on Friday said that with four more persons- two of them having travel history abroad and the two others outside J&K as part of a religious congregation- have tested positive for the COVID-19, taking the number of such patients to eighteen. It said that as many as 3,136 persons have been kept under home quarantine including facilities operated by the government while as 169 are in hospital quarantine.

It added that the number of persons who are under home surveillance stands at 1,877 and of those who have completed their 28-day surveillance period at 581. Out of 423 samples sent for testing, 400 have tested negative.