Places of worship shut after first Covid-19 casualty in Kashmir 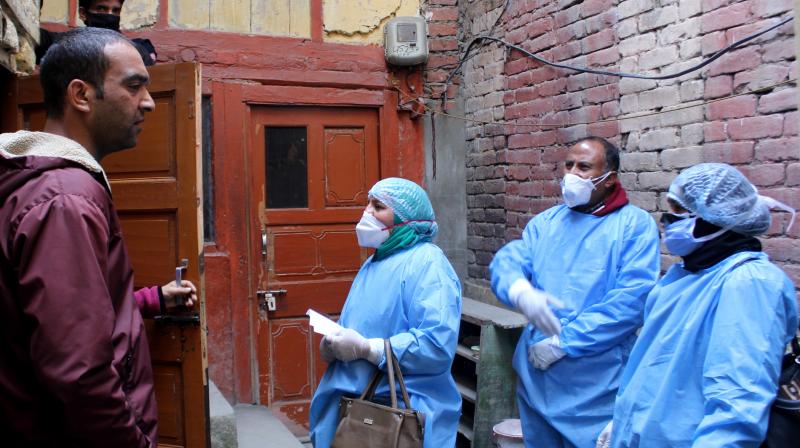 File photo of health staff carrying out a door-to-door campaign in Khanyar locality of Srinagar. The first patient to test positive for the coronavirus was from this locality. On Thursday a person who had flown on the same flight as the first positive also tested positive for coronavirus. (DC Photo by H U Naqash)

Srinagar: The Jammu & Kashmir authorities on Thursday decided to shut all places of worship in the Valley after it recorded the first death due to the novel coronavirus, COVID-19.

The number of patients infected by the deadly virus rose to 13 after three more cases tested positive today. Thirteen more such patients are being treated in the union territory (UT) of Ladakh.

Among the three new positives are two siblings aged 8 months and  years whose grandfather returned from the Umrah pilgrimage to Saudi Arabia on March 16 and tested positive on March 24.

The man, a resident of the Natipora area in Srinagar, had shared the same flight in which the Kashmir Valley’s first COVID-19 patient, a 67-year-old woman from the Khayam, Khanyar locality in Srinagar, flew back home.

The third person to test positive on Thursday is a resident of the frontier district of Rajouri. He had been in close contact with the person who died of the virus earlier in the day.

The 65-year-old man who died in the government-run Chest Disease (CD) Hospital in Srinagar had a medical history of diabetes, hypertension and obesity. A noted businessman and originally a resident of Sopore town, the man had contracted the deadly virus while attending a public outreach programme of Tablighi Jamaat in various parts of the country.

“The patient had returned to Kashmir after visiting New Delhi, Uttar Pradesh and Jammu recently after participating in a Tablighi Jamaat programme in which people from Indonesia and Malaysia were present,” an official said.

The J&K government has ordered an inquiry into the alleged mishandling of the patient after he tested positive for COVID-19 at CD Hospital.

An official who wished not to be named said that the hospital administration, even after knowing the travel history of the patient and observing the symptoms of COVID-19 in him, did not put him in quarantine or bring the matter to the notice of authorities when he left the hospital without getting admitted.

Official sources said while on the loose, he spread the virus by intermingling with the public and relatives.

On Wednesday, there were chaotic scenes at hospitals and various other medical facilities in Baramulla and Bandipore districts with panic-stricken residents who had met this person rushing there to offer themselves for COVID-19 testing.

A report from Sopore said about two dozen mourners attended the funeral of the Covid-19 victim on Thursday afternoon. While the pallbearers and grave-diggers wore protective gear -- masks, overalls and eye gear - provided by the authorities, others hid their faces with surgical or locally made masks.

In order to prevent the spread of the virus, the authorities have decided to shut places of worship across the Valley. Srinagar’s DC Shahid Iqbal Choudhary claimed that major Muslim shrines and Sikh gurdwaras supported this decision. He tweeted, “Closure of all religious places in #Srinagar is under way..with active cooperation of management committees. Revered shrines Hazratbal, Naqshband Saheb show the way. #StayAtHome".

Despite repeated requests by government authorities and advisories issued by some religious organizations and prominent clerics, joint prayers and congregations continue to be held in many mosques and hospices in the Valley.

At midnight Wednesday, people recited adhan or azaan from the balconies, rooftops and lawns of their houses, apparently in the belief this would invoke god's mercy and ward off COVID-19. A Pakistani cleric had earlier asked Muslims to say azaan from wherever they would be on Wednesday night. His video message was telecast by a Pakistani TV channel.

Though his call was supported by several other clerics, many prominent religious leaders in South Asia and beyond have claimed that such an exercise is not permissible in Islam as there is no evidence or record to suggest that this was ever done during Prophet Muhammad's time or by his sahaba or companions.

Kashmir's Grand Mufti, Nasir-ul-Islam, on Thursday announced that no weekly congregational prayers would be held in Valley mosques on Friday.