While half of the personnel will see to construction security, the other half will manage counter-insurgency operations, the acting DG said. 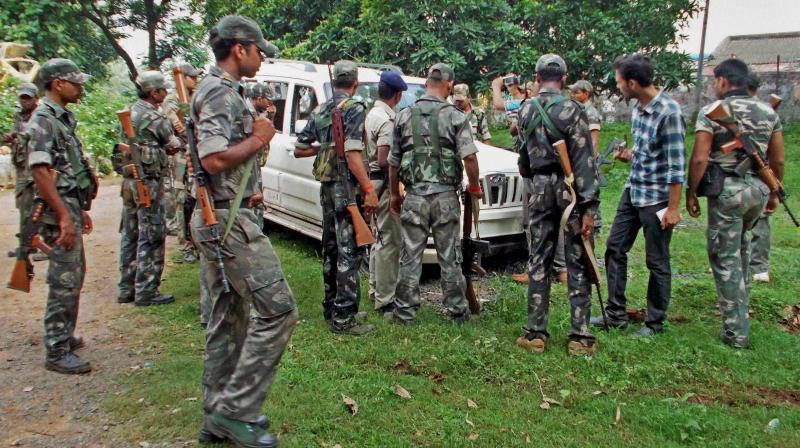 The director general of the CRPF, which has deployed a total of 28 battalions in Chhattisgarh with ten being only in the Bastar region, said the new action plan of the force will be to effectively dominate the area. (Photo: PTI/Representational Image)

New Delhi: The CRPF has decided to enhance the number of lethal counter-insurgency operations in the worst Naxal hit south Bastar region of Chhattisgarh after its 37 men were killed in recent Naxal attacks in the Sukma district.

Acting Director General (DG) of the CRPF, Sudeep Lakhtakia said the ambush has "naturally called for the revision of Standard Operating Procedures (SOPs)" in these areas.

He said the force has decided to undertake these new measures as it will continue to secure the road construction work that helps to bring development to these remote areas of central India.

"We have decided to change the strategy. We have learnt some lessons. While I cannot go into the details, I can tell you that we will undertake re-deployment of our forces and will also enhance the quantity and quality of special counter-insurgency operations," the DG said, a day after he visited the ambush site in Sukma's Burkapal.

The force will have to ensure that the enemy does not attempt any surprises on it. "We track and engage them well before," he said. So, while half of the personnel will do road construction security and other similar tasks, the other half will do special counter-insurgency operations, the acting DG said.

The Director General of the CRPF, which has deployed a total of 28 battalions in Chhattisgarh with ten being only in the Bastar region, said the new action plan of the force will be to effectively dominate the area.

A regular Central Reserve Police Force (CRPF) battalion comprises of about 1,000 personnel. Lakhtakia, however, said in such operations where the troops have to be out in open for long and the terrain is treacherous, the SOPs and strategies have to be "revised as and when required" and that is what they were doing.

He said a preliminary analysis of the ambush spot, where 25 men were killed on April 24, indicates that four sections of the CRPF men were separated by a distance of about 600-750 metres with bullets flying around.

"The Naxals were tracking the troops... They attacked the men after deciding the time and place of the attack. They used human shields of local villagers," the DG said, adding that apparently the personnel were having their lunch when the first assault took place.

"The sequence of the events will take some time to construct... An inquiry is already in progress and that will tell us more," he said. Establishing the fact that if any violation of SOPs took place or any other lapses occurred, it will only come forth after the inquiry completes, he said.

Lakhtakia said the reports of possible mutilation of bodies of some jawans is yet to be ascertained. Meanwhile, senior officials engaged in anti Naxal operations said some special operations, under the command of the elite jungle warfare unit of the CRPF -- CoBRA – will soon be launched in the south Bastar region including Sukma, Dantewada, Kondagaon, Bijapur and Jagdalpur areas.

The troops will be serviced with a dedicated air support of at least four choppers based in the vicinity of these areas and a fleet of three Unmanned Aerial Vehicles (UAVs). The UAVs undertake long haul sorties from their base in Bhilai in the state over the forests of Bastar and around the southern tip of the state that borders Odisha, Telangana and Andhra Pradesh.

While the ambush on April 24 had claimed 25 lives of the CRPF, the one on March 11 in the same district near Bheji had killed 12 CRPF men, apart from the Naxals looting a huge cache of arms, ammunition and communication gadgets from the slain men.