The two leaders began their informal meetings way back in 2014 when Xi was hosted by Modi at the Sabarmati Ashram. 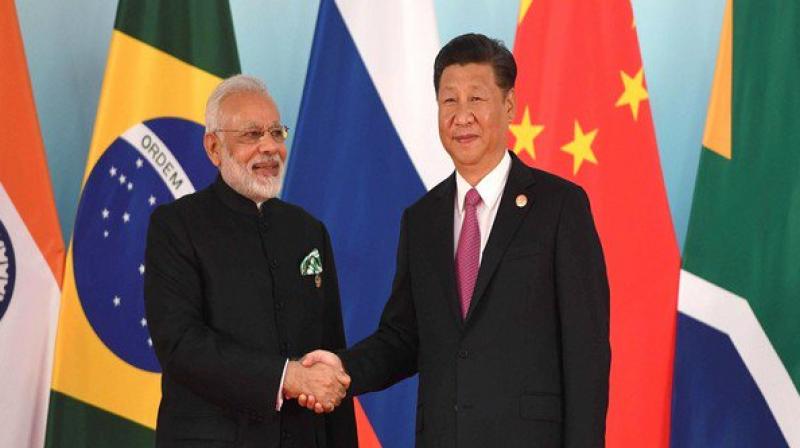 The summit is being seen as an effort by India and China to rebuild trust and improve ties that were hit by the 73-day-long Doklam standoff last year. (Photo: ANI/Twitter)

New Delhi: A one-on-one meeting, a tour of one of the best known museums of China, dinner by a picturesque lake side followed by talks with top officials would mark the two-day unprecedented informal summit between Prime Minister Narendra Modi and Chinese President Xi Jinping beginning in Wuhan from Friday.

Billed as 'heart-to-heart' summit aimed at evolving consensus between the two leaders to look for solutions to some of the most contentious issues including the border dispute bedevilling the two countries, Modi and Xi will begin their marathon one-on-one talks after lunch on Friday.

They will initially visit the Hubei Provincial Museum here which has a large number of state-level historic and cultural relics.

It will be followed by talks between the two leaders accompanied by six top officials from each side. The two will have one-on-one dinner at the famous East Lake, a favourite holiday destination of China's revolutionary leader Mao Zedong.

On Saturday, they will resume their one-on-one interaction at 10 a.m (local time) with walks by the lake side, boat ride and wind up their talks over lunch, official sources here said.

The two leaders began their informal meetings way back in 2014 when Xi was hosted by Modi at the Sabarmati Ashram of Mahatma Gandhi in Gujarat. They have met and interacted with each other in about a dozen international meetings since then.

But this will be their "heart-to-heart" informal summit. There will be no agreement signed or a joint statement issued.

It is a summit, according to the officials, to forge consensus to resolve the issues with follow up actions by officials than announcing any agreements. This is something the leaders of the two countries have never tried so far, they said.

The two leaders would spend most of time interacting with each other only accompanied by translators with one-on-one conversations focussing on global, regional and bilateral issues.

The summit is being seen as an effort by India and China to rebuild trust and improve ties that were hit by the 73-day-long Doklam standoff last year.

The famous East Lake where the two leaders would spend most of the time was a favourite holiday spot for Mao. The picturesque garden adjacent to the mighty Yangtze river is also where Mao used to enjoy his favourite pastime swimming.

The place has iconic holiday villa of Mao, which is now a memorial where Xi is expected to take Modi round.

At the Sabarmati Ashram in Ahmedabad and its surroundings, Modi was Xi's guide to introduce the essence of Gandhian thought, including his iconic Charkha where the Chinese leader, who has emerged as the powerful leader of the country with an unlimited tenure, tried his hand to operate Gandhiji's most cherished symbol.

It is now Xi's turn at Wuhan.

The details of the informal summit was not disclosed but officials said it included walks by the two leaders in the East Lake where they will have a boat ride and take walks just accompanied by their translators.

In a pre-departure statement, Prime Minister Modi said he and President Xi will review the developments in Sino-Indian relations from a strategic and long-term perspective.

"President Xi and I will exchange views on a range of issues of bilateral and global importance. We will discuss our respective visions and priorities for national development, particularly in the context of current and future international situation," Modi said.

Modi will have relaxed meetings with Xi tomorrow and the day after, which officials say could become a game-changer if they manage to reach consensus on finding the solution to the problems, including the way forward to resolve the boundary dispute and other vexed issues that bedevilled the ties.

Ahead of the summit, China said the arrangements being made for Modi's stay in Wuhan would go beyond the expectations of the Indian side and the informal summit could be a new starting point.

"This kind of one-on-one is not often seen in other countries," Chinese Vice Foreign Minister Kong Xuanyou told the media this week.

"The two leaders will spend two days in Wuhan. In these two days, they will engage with each other on various forums. What I can tell you is that they will spend a lot of time together one-on-one," he said.

The two leaders will have strategic communication on the major changes in the international landscape unseen in more than 100 years, Kong said in an apparent reference to major changes taking place following US President Donald Trump's aggressive 'America First' policy threatening to undermine the process of globalisation under which India and China are the biggest beneficiaries.

They will have in-depth exchange of views on the issues of overarching long-term and strategic importance in the bilateral relations, Kong said.

Conceived on the lines of the 1988 ice-breaking visit to China undertaken by the then prime minister Rajiv Gandhi and his far-reaching talks with China's paramount leader Deng Xiaoping setting a new tone for the relations post-1962 war, Xi-Modi dialogue at Wuhan was aimed at a working a new paradigm for the bilateral relations for the next 15 years, Indian officials said.

This will be fourth visit of Modi to China after he came to power in 2014. He is again due to visit China to take part in the SCO summit to be held at Qingdao city on June 9-10.