There was some buzz that he would join the BJP but that did not happen. 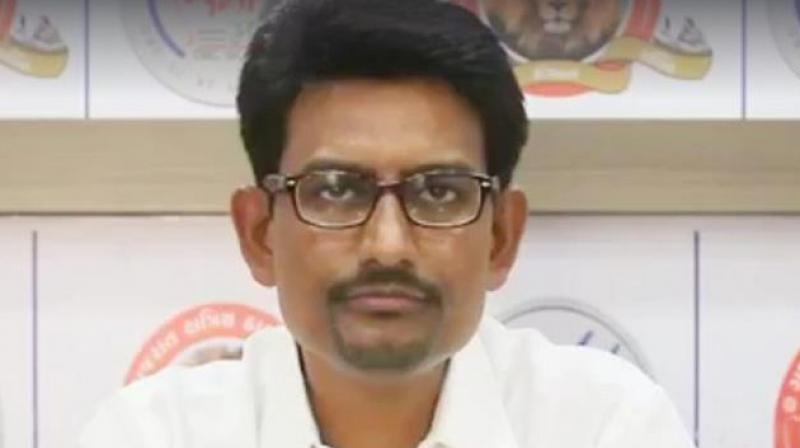 Ahmedabad: The results of the Lok Sabha elections in Gujarat will decide the political future of OBC leader Alpesh Thakor, who eme-rged as the face of the Thakor community during the Patidar reservation agitation in 2015.

Mr Thakor, a Congress MLA from Radhanpur, left the party just ahead of the Lok Sabha elections, saying he was being sidelined and injustice was done to his community.

There was some buzz that he would join the BJP but that did not happen. Mr Thakor openly campaigned against the Congress during the elections. With voting completed, Congress chief whip Ashwin Kotwal has approached the Assembly secretariat seeking Mr Thakor’s expulsion as a legislator. “He has resig-ned from the Congress and worked against the party. Since he was elected on a Congress ticket, he cannot continue as an MLA as per the rules,” Mr Kotwal wrote.

Assembly Speaker Rajendra Trivedi is expected to hear the matter.

Political observers believe that the Congress did not initiate action against Mr Thakor before the elections out of the fear that it would lose the votes of the community, which dominates four Lok Sabha constituencies in North Gujarat.

Many believe that if the Congress performs well, especially in Banask-antha, Patan, Mehsana and Sabarkantha, it will give a clear signal that the young politician does not sway the Thakor voters. It will harm his prospects if he were to join the BJP, as he will not be in a position to bargain. “He negotiated hard with the BJP but since he was adamant, things didn’t materialise. If he fails to damage Congress prospects in the election, of what use will he be,” said a BJP leader.

Moreover, when Mr Tha-kor parted ways with the Congress, two party MLAs and other leaders of his community outfit ‘Thakor Sena’ seemed to stand by him.

The Congress leadership succeeded in persuading these MLAs who are now reluctant to leave the party in support of Mr Thakor. The Congress also managed to get the support of some factions in the Thakor Sena.

“When people have voted for me, why should I resign,” Mr Thakor asked mediapersons. He threatened the Congress to be ready for the repercussions if he loses his membership in the Assembly.