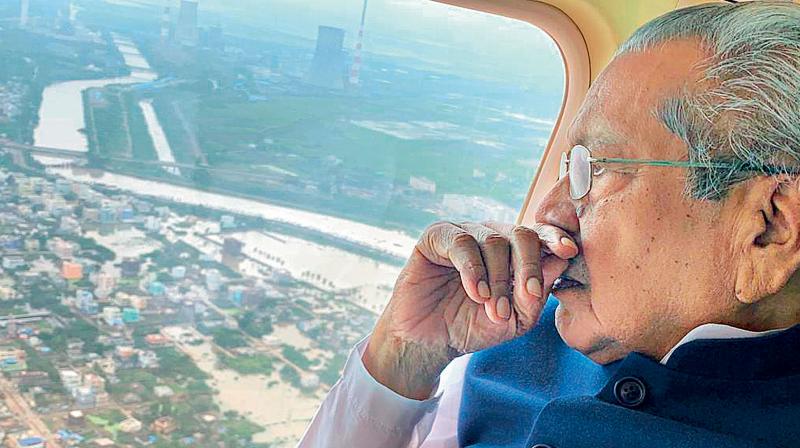 Four staff members including the chief security officer and the personal cook of the governor hailing from Odisha tested positive on Sunday. The other two are an attendant and a staff nurse.

Though the government was tight-lipped, highly placed sources told Deccan Chronicle that tests were conducted on the 85-year-old governor also for the second time within a week and the results are awaited.

Harichandran tested negative last week, sources said, adding that samples were taken from the governor again Sunday evening and sent for an RTPCR test. “We are expecting the result by Monday,” said a senior bureaucrat.

Covid-19 has also affected Kurnool MP Dr Sanjeev Kumar’s family. While his 83-year-old father was shifted to Hyderabad in a critical condition, five other family members who too tested positive are undergoing treatment in Andhra Pradesh's designated Covid hospital in Kurnool.

The MP, who is a doctor by profession and has 26 doctor relatives working in different hospitals, announced that the virus had entered stage 3 in Kurnool as was evident from his family members getting infected even after quarantining themselves for more than a month.

Dr Kumar is perhaps the first lawmaker to openly announce that community spread has already set in, a reality that the Centre is unwilling to accept. New Delhi took objection to the revelation of community spread by the World Health Organisation, which had to retract its observation following objections raised by the Centre.

In Raj Bhavan, the authorities took samples of 16 staff members in two spells on Friday and Saturday. Four of the eight persons whose samples were taken on Friday were found infected.

Meanwhile, the Kurnool MP’s brothers reside in Narsaraopet, which is already declared as red zone. Two of his brothers, their wives and the son of a brother tested positive on Saturday and his father had to be shifted to Hyderabad as his condition turned critical.

Speaking to Deccan  Chronicle, the MP said "All clinics and residences of my family members have been under total lockdown. There was no outside contact as we insulated ourselves. We have not allowed even newspapers in our house. But still six of my family members got a positive result. Therefore, it establishes the fact that we are in third stage in Kurnool."

When asked how he could conclude so, he said his family members had not interacted with any foreign-returned people or Tablighi Jamat Nizamuddin attendees. The MP said that it all depends on the incubation period. Some people get symptoms within 14 days others while some others after 30-40 days. Asymptomatic carriers are potential positives without their knowledge, he said.
One of his brothers who works at MyCure hospital as an orthopedic doctor and performed an operation on March 26. After that we strictly warned him not to go out. He confined to the house but now the test results shows he is corona positive, Sanjeev Kumar said.

He said except his father, all of his family members healthy. He appealed to people not to panic. All positive cases are not fatal due to the robust immune system we Indians have due to the BCG vaccination, he said.

"We have been living with infections since our childhood. Our bodies can withstand new viruses to a larger extent. Only old people with co-morbidity characteristics may face life-threatening experiences due to new virus", the MP reasoned.

Dr Sanjeev Kumar said that we are already 40-50 days into the coronavirus crisis and not a single ventilator case was reported in Kurnool so far. A fortnight back, Dr Sanjeev Kumar announced that he was corona negative.

The doctor said in Kurnool we had only five deaths due to corona and none of them required any ventilator assistance. Therefore, one need not harbor thoughts of fear on hearing testing positive, he said.