India   All India  27 May 2017  1 dead in Kashmir protests after death of Burhan Wani's successor
India, All India

1 dead in Kashmir protests after death of Burhan Wani's successor

The police also said the civilian was killed in the crossfire between militants and security forces in Tral. 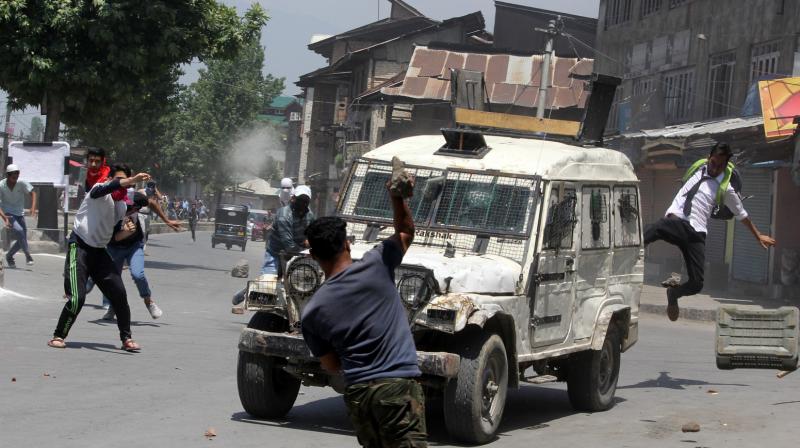 Clashes broke out in the Down Town area after Sabzar Ahmed Bhat's death on Saturday. (Photo: DC/H U Naqash)

Srinagar: One civilian was killed and 19 were injured in the firing between security forces and militants at Tral, after violence erupted following the death of Burhan Wani's successor Sabzar Ahmed Bhat on Saturday.

The police also said the civilian was killed in the crossfire between militants and security forces in Tral.

According to hospital sources, six people received bullet injuries while the rest were wounded by pellets. Six policemen were also injured due to stone pelting

Earlier on Saturday, Sabzar Ahmed Bhat, a top commander of Hizbul Mujahideen, killed along with one accomplice in a fierce gunfight with security forces in Kashmir’s southern Tral region.

Violence erupted in several parts of the valley as the news about Bhat’s killing spread. More than 50 people have been injured in clashes underway in different parts of the south, central and north Kashmir, and Srinagar.

In a separate incident, six infiltrating militants were killed in a clash with Army troops in Uri sector of the Line of Control (LoC) in Baramulla district. The incident comes a day after the Army had said it stopped an infiltration attempt backed by the Pakistan army along the de facto border by killing two intruders believed to be the members of a Pakistan army’s Border Action Team (BAT).

The officials in Srinagar said that the firefight began in Tral’s Saimu village after the security forces laid siege to it on learning about the presence of militants. Jammu and Kashmir’s Director General of Police, Shesh Paul Ved, confirmed that Bhat is among the two militants killed, so far.

The other slain militant along with Bhat was identified as Faizan Ahmed.

Spontaneous clashes erupted in several parts of the Valley after the news of Bhat’s killing spread. Clashes between irate crowds of youth and the security forces have been reported also from encounter site in Tral’s Saimu village.

Five people were injured in security forces’ action against the protesters, the reports said. The areas elsewhere in the Valley that have witnessed protests and clashes fall in the districts of Pulwama, Shopian, Anantnag, Srinagar, Baramulla and Kupwara.

At most places, the traders have brought their shutters down and vehicles are being withdrawn in a chaotic situation. Media persons have been denied access to the encounter site, reports said.

“We were not allowed to go close to the encounter site by the security forces. Tral is very tense and people are out on the streets chanting slogans in praise of Sabzar and for freedom,” said Zubair Ahmed Dar, a reporter over the phone from Tral.

A report from Anantnag said that at least 35 injured persons were admitted to the district hospital following clashes occurred in different parts of Anantnag town and its neighbourhood.

One of the seriously injured persons has been referred to a Srinagar hospital for specialised treatment, doctors at the district hospital said.

Amid heightening tensions and clashes, the authorities have suspended Internet services partially to restrain the “spread of rumours” and use of social media to provoke violence.

The suspension of the Internet came a day after the State government lifted a month-long ban on, at least, 22 social networking websites.

The students of various educational institutions across the Valley left their classes midway and taken to the streets at many places yelling pro-freedom slogans. The police and the CRPF are facing a tough time to deal with the situation at places, said an official who spoke on condition of anonymity.

Bhat had succeeded Burhan Wani, the popular Internet-savvy commander of Kashmir’s frontline indigenous militant outfit, whose killing by security forces on July 8 last year had resulted in massive violence in the Kashmir Valley.

In the five-month long turbulence, more than 80 civilians and two policemen had died and thousands injured, mainly in security forces’ firings and other actions besides leaving behind trails of destruction of infrastructure.

Also, over 4,000 security personnel were injured in stone-pelting incidents and mob violence.