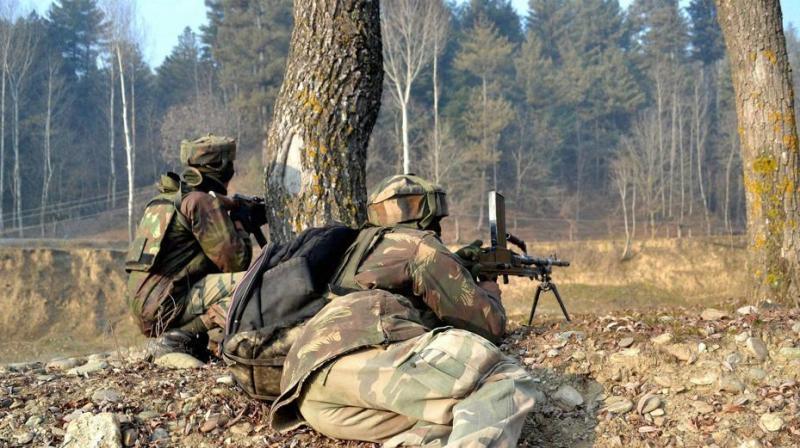 The home ministry officials had after the Ramzan ceasefire announcement made it clear that it does not apply on those attempting to infiltrate into Jammu and Kashmir from across the border and that the security forces would retaliate also if and when attacked by militants in the hinterland. (Representational image)

Srinagar: The Army on Saturday said that it foiled an infiltration bid on the Line of Control (LoC) after killing five militants in a gunfight in Tanghdar area of frontier Kupwara district.

“Four terrorists were killed while attempting to infiltrate own side this morning. The operation is still underway,” defense spokesman Colonel Rajesh Kalia said. He later during the day said that a fifth militant has been killingwas killed, raising the toll to five. “Infiltration bid has been eliminated in Tangdhar sector. Four terrorists have been killed while attempting to infiltrate early today (Saturday) morning. Operations is in progress,” the spokesman said in a brief statement to media. Later, he said, “another terrorist has been killed in Tangdhar encounter”.

He said earlier that the Pakistani troops had violated the November 2003 ceasefire understanding by resorting to small and medium arms firing on the de facto border in the area.

This is the second such incident reported from Kupwara after the Centre on May 16 announced a conditional ceasefire with militants and halting of counterinsurgency operations in Jammu and Kashmir during the Muslim fasting month of Ramzan. In earlier clash, three militants were shot dead by the Army’s 15 Rashtriya Rifles in Brinjal woods near Shah Nagar Jat Gali (pass) in Handwara area of Kupwara soon after they reported infiltration on May 18.

The home ministry officials had after the Ramzan ceasefire announcement made it clear that it does not apply on those attempting to infiltrate into Jammu and Kashmir from across the border and that the security forces would retaliate also if and when attacked by militants in the hinterland.

Army Chief, General Bipin Rawat, who was in the Kashmir Valley on Friday to review the security situation ahead of the annual Amarnath yatra, had said the counterinsurgency operations suspended to create an atmosphere of peace during Ramzan. He hinted that the conditional ceasefire may be extended beyond Ramzan if situation on ground remained peaceful.

“We suspended the operations to give people an atmosphere of peace and I believe people are happy. If things continue the way they are today we may think of continuing with non-initiation of combat operations,” he said. He, however, hastened to add “If militant activities continue, we cannot do so.”

While speaking to reporters after inaugurating the digital education program at Army Goodwill Public School at Pahalgam, he had also said that Pakistan should stop sending militants to Jammu and Kashmir if it wants peace in the region. “We want peace and Pakistan has to reciprocate which it can do by desisting from pushing infiltrators into Jammu and Kashmir, “ he had said.

Replying a question on the recent flare up along the border with Pakistan, Gen. Rawat said, “We want peace on the borders but as you know Pakistan continuously violates the ceasefire that causes loss of life and property. In such case, we have to retaliate”.