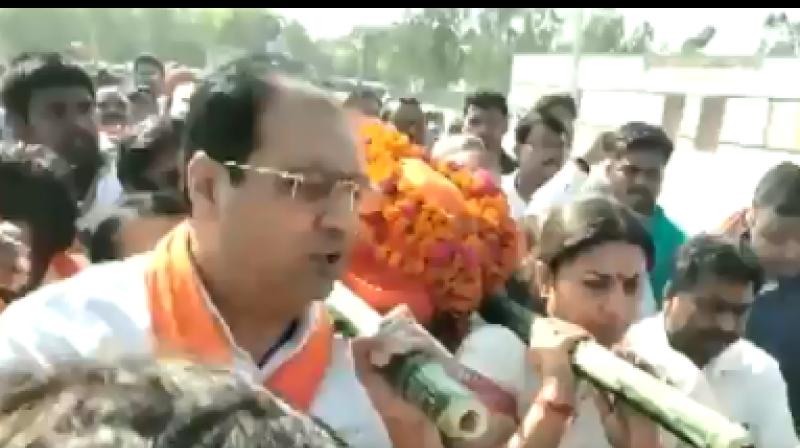 Amethi: Three suspects have been arrested in connection with the killing of a BJP worker in Uttar Pradesh's Amethi district two days ago, police said on Monday.

Director General of Police (DGP) O P Singh said there was a local-level political rivalry between the deceased, Surendra Singh, 50, and the father of one of the accused.

"We have arrested three persons. After the incident was reported, as many as seven people were taken into custody and they were thoroughly quizzed," Singh told reporters here.

"Among the seven people, there were three who were linked with the incident." Amethi Superintendent of Police Rajesh Kumar said.

Those arrested have been identified as Ramchandra, Dharmanath and Naseem, while two persons were absconding.

Singh, a close aide of newly-elected Amethi MP Smriti Irani, was shot when he was sleeping in his house at Baraulia village, 25 km from the district headquarters, on Saturday night.

The former village head was referred to a Lucknow hospital but succumbed to injuries during treatment.

"The incident is a result of old enmity. There was tension between the slain ex-pradhan and Dharamnath since the last panchayat election," the SP said.

Both were preparing for the coming panchayat election that is likely to be held later this year, police sources said.

The DGP said a .315 bore countrymade pistol and a blood-stained towel had been recovered from Ramchandra, whose motorcycle was also used in the incident and is yet to be recovered.

The officer said the towel had been sent for forensic examination. "In unveiling the entire case, the police have examined circumstantial evidence and electronic surveillance," he said.

Singh said Atul Singh and Waseem, who are on the run, have been traced at Delhi and Lucknow.

The arrests come a day after Chief Minister Yogi Adityanath had directed the DGP to take effective action in the case.

Irani, who met the deceased's family in Amethi on Sunday, had alleged that Singh was killed so that the constituency could be "terrorised, disintegrated and bowed down."