He reminded the audience that the Congress recently moved an impeachment motion in Parliament against CJI Dipak Misra. 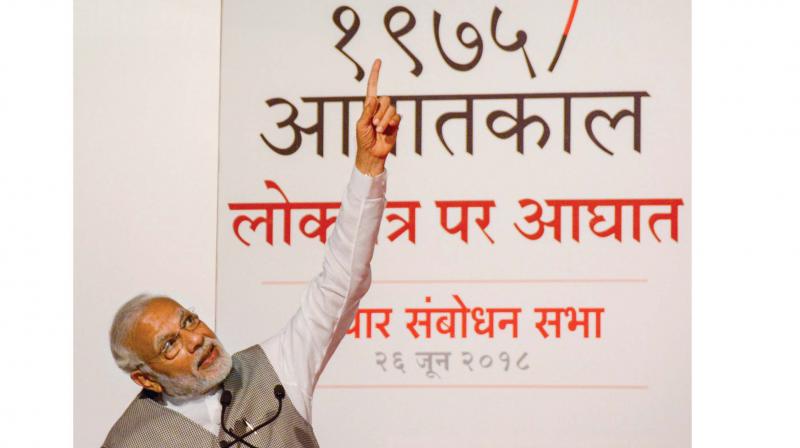 Mumbai/New Delhi: Even though 43 years have passed since the then Prime Minister Indira Gandhi imposed a state of “Emergency” on the nation, the issue remains a major political weapon for the BJP to take on the Congress.

Addressing a BJP function to observe “Black Day — The Imposition of 1975 Emergency” in Mumbai, Prime Minister Narendra Modi launched a stinging attack on the Congress, particularly the Gandhi clan without once naming them, choosing to refer to them only as “the family” with accompanying adjectives like “arrogant and egotistic”.

The Prime Minister tore into the “Congress and its family”, saying that for them “nothing, no one and no Constitution comes above the family”, and added that they have not changed “their mentality since the Emergency”. Mr Modi dubbed the 21-month Emergency imposed by the Congress on June 25, 1975 — a black spot on Indian democracy when several fundamental rights were suspended and hundreds of Opposition leaders were jailed — as a “sin of the party”.

He said during Emergency the “entire country was turned into a jail for selfish personal interest of that family”.

Giving one example of the Indira government’s high-handedness, Mr Modi said that when singer Kishore Kumar refused to sing for the Congress during Emergency, his songs were not allowed to be played on AIR.

“An atmosphere of fear prevailed then. We will rarely find another example of how the Constitution was misused as a tool for a family,” he said in a fierce attack to counter Opposition’s accusations that India is under “undeclared Emergency” under the BJP rule.

Accusing the Congress’ current leadership of “spreading lies about fear and intolerance in the country”, he said that whenever “this family” senses loss of power, it starts “crying” that the country is passing through a crisis and that only it can save the country.

The Congress tried to defend the imposition of Emergency as a measure to “defend the rights of the poor, the dalits and the have-nots” and hit back at the Prime Minister by calling him a “brutal, Aurangzeb-like dictator” whose “suit-boot sarkar” is devoted to protecting the interest of crony capitalists.

While the Prime Minister said that the Congress, the architect of Emergency, should not be giving lessons on democracy, Congress party spokesperson Randip Singh Surjewala said, “Aurangzeb never took lessons from anybody. Dictators don’t take lessons, only history teaches them lessons and I am sure Modiji will also have the same fate.”

Mr Surjewala went to the extent of defending the Emergency saying it was a move against the Janata Party which was “pro-rich and pro-zamindars”, and part of the Congress’ fight against hoarders and black-marketers who were being protected by the Jana Sangh (the earlier avatar of BJP).

As the Congress took a jibe at the Prime Minister by saying that talking about the Emergency “will not bring back the promised achche din (good days)”, the Prime Minister reminded the gathering in Mumbai that talking about the Emergency was not merely to criticise the Congress for the “sin of attacking the Constitution, but also to create awareness about its dangers”.

Talking about the Congress, PM Modi told the gathering that when a notice was served on the “family, it was so arrogant and so egotistic that it launched an attack on the Chief Justice of India”.

He reminded the audience that the Congress recently moved an impeachment motion in Parliament against CJI Dipak Misra.

On June 25, 1975, Indira Gandhi imposed the Emergency during which fundamental rights were severely restricted, curbs were imposed on the media and several Opposition leaders were jailed. The BJP has been observing the day as “Black Day”.

Mr Modi said that while the youth of today might not “feel the pain and anger” which was felt by the people of the country during Emergency, it was important for the youth to know what happened in 1975.