Tabrez was allegedly tied to a pole and also forced to chant 'Jai Sri Ram' and 'Jai Hanuman'. 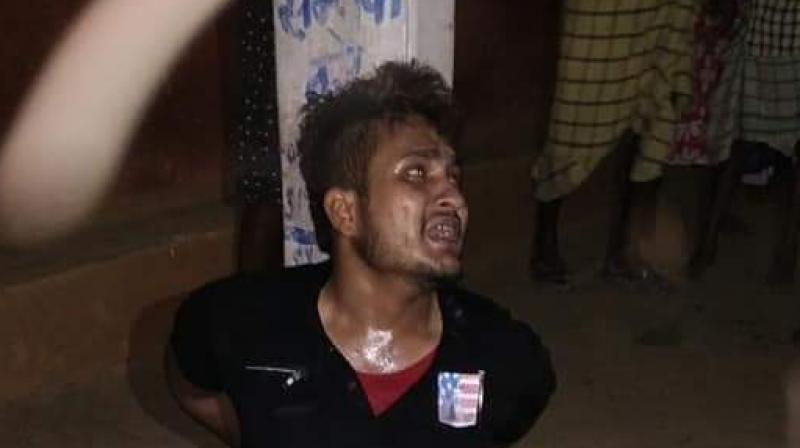 Tabrez Ansari succumbed to his injuries after being attacked by the mob on the suspicion of stealing a motorcycle on June 18 in Jharkhand’s Dhatkidih village. (Photo: twitter)

Jharkhand: According to the post-mortem report of the 24-year-old Tabrez Ansari, the victim of the Jharkhand mob lynching case had no internal injuries.

He succumbed to his injuries after being attacked by the mob on the suspicion of stealing a motorcycle on June 18 in Jharkhand’s Dhatkidih village.

Tabrez was allegedly tied to a pole and also forced to chant 'Jai Sri Ram' and “Jai Hanuman”.

Ansari who died at Seraikela Sadar Hospital on June 22 was beaten for more than seven hours by a mob and on last Wednesday morning handed to police.

“No internal injury was found in Tabarez's body in the post mortem. His viscera have now been sent to Ranchi forensic laboratory for forensic tests to conclusively ascertain the actual cause of his death. After he came here in Sadar Hospital from jail, we had given him oxygen and tried our best to keep him alive,” Dr. A N Dey, Seraikela-Kharsawan civil surgeon (CS) told Hindustan Times.

“Another inmate gave him warm water but he asked for cold water. Immediately after drinking water he complained of uneasiness and giddiness. He was immediately rushed to the Seraikela Sadar Hospital,” an official said.

Seraikela SDO Dr. Washarat Quayum, heading the three-member probe committee constituted by DC Chhavi Ranjan, said that Tabrez was kept in the medial ward of Seraikela jail since June 18. He was produced in a local court and sent to judicial custody.

“We have recorded the statement of jail officials, doctor, guards, and inmates. We have also checked the CCTV footage. We will soon submit our report to the DC,” said Dr. Quayum told Hindustan Times. Another probe committee headed by Seraikela SDPO Avinash Kumar would submit its report to the SP Kartik S soon.

Following the mob lynching of Tabrez Ansari police arrested 11 persons for allegedly assaulting him and beefed up security in Dhatkidih village. Fearing arrest, most male villagers fled from the village.

The relatives of Tabrez demand strict action against the culprit mob and accused the police of not treating their son properly.

Taking a dig at this, Prime Minister Narendra Modi in his speech in Rajya Sabha on Wednesday said that those who lynched a young Muslim man in Jharkhand deserve the severest punishment and violence in any part of the country should be condemned equally.