Police said as he had no immediate family, the body was handed over to Khan, his employer who held his last rites. 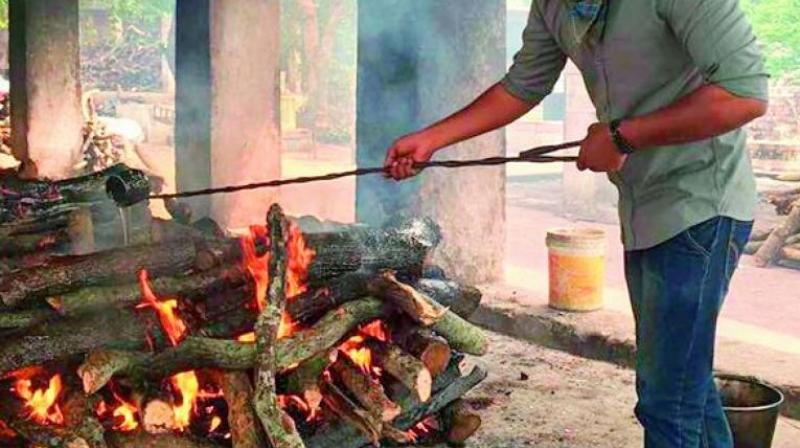 Reportedly, around 1000 people from the Hindu and Muslim communities attended the ceremony. (Photo: Representational I File)

Bhadohi: Setting an example of communal harmony, a Muslim family in Uttar Pradesh's Harirampur village conducted 'terhvi', a post-death ceremony, of a Hindu man as per custom.

Terhvi is a ceremony held on the thirteenth day after the death is mourned. Morari Lal Srivastava (65) was a worker at a farm owned by Irfan Mohd Khan and Farid Khan, and he died after being bitten by a poisonous animal when he was working on a farm on June 13, according to police.

However, it was not immediately known what had bit Srivastava. Police said as he had no immediate family, the body was handed over to the Khans who held his last rites with the help of some other workers of the farm.

On Tuesday, the Khans held the 'terhvi' feast for Srivastava and invited people for the ceremony.

The invitation cards had names of members of the Khan family and that of their firm. Speaking to PTI on Thursday, Irfan Khan and Farid Khan said Srivastava was working for them for the past 15 years and was like a family member.

"He was like an elderly family member and we did what should be done for any elderly member of a family," Irfan Khan said.

"Even at the time when we went about distributing cards for terhvi, people expressed surprise over it," he said.

Before the feast, as per norms, 'shanti paath' was held and all custom, including shaving off hair, was followed, Irfan Khan said.

Reportedly, around 1000 people from the Hindu and Muslim communities attended the ceremony.