Mumbai Police requested people not to venture in waterlogged areas and to maintain distance from the sea. 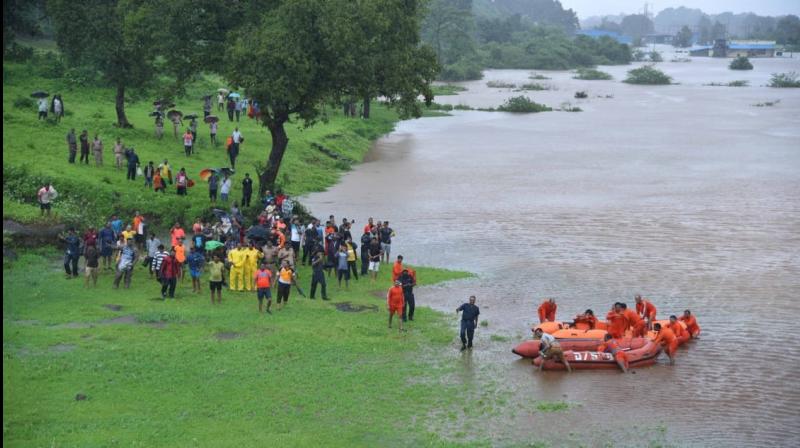 Mumbai: All 700 passengers onboard the Mumbai-Kolhapur Mahalaxmi Express, who were stranded after the halted due to torrential rainfall, have been evacuated safely Chief Public Relations Officer of Central Railways said on Saturday.

“All the passengers were rescued safely from Mahalaxmi express. They are being provided food and medical aid. There were nine pregnant woman in the train who were safely rescued. One of them is admitted to a nearby hospital for check-up,” Thane district collector Rajesh Narvekar said in a statement.

The rescue operation, which began in the noon, lasted for about three hours.

Eight flood rescue teams from Navy including three diving teams have been mobilised with rescue material, inflatable boats and life jackets. A seaking helicopter has been also sent with divers for deployment in the area as advance assessment party.

The train had departed at 8:15 pm on Friday was stalled between Vangani and Badlapur, which is 100 kilometres away from Mumbai, since 3 am on Saturday, according to a passenger on board.

In an unprecedented measure, the Maharashtra government had requested the defence officials to arrange airlift of passengers of the train train stuck on tracks near Mumbai since Friday night.

Speaking to ANI, CPRO Sunil Udasi said Railway Protection Force and City police had reached the site where the train is held up, and biscuits and water were distributed to the stranded passengers.

Meanwhile, Maharashtra's Directorate General of Information and Public Relations (DGIPR) Brijesh Singh said three boats have reached the spot where the train is stranded, adding that the Chief Secretary is looking into the situation himself.

Kolhapur-Tirupati Express and Tirupati-Kolapur Express have been cancelled by the Central Railways on Saturday, Railways said.

According to reports, seven aircraft including – five Indigo, one Air India and one Emirates aircraft – had taken off from the Mumbai airport at around 7:42 am.

Education Minister Ashish Shelar has authorised school and college principals in Mumbai to declare a holiday to ensure students are not inconvenienced if heavy continue to lash city, NDTV reported.

The rain had also forced the cancellations of seven outbound flights and four incoming planes while eight flights were asked to circle and nine were diverted past midnight.

Mumbai’s suburbs received 73-303 mm rainfall in the 24 hours starting on Friday morning, the India Meteorological Department (IMD) said. It also predicted heavy rainfall through Saturday as well. A few spells of heavy rain across isolated areas in the city and its suburbs have been predicted on Sunday.

Traffic jam on the Western Express Highway started before the toll plaza at Bandra and extended all the way up to Borivali, around 25 km away.

Rail services too have been hampered by the intermittent rains.

"Very heavy rains in Kurla-Thane belt and very-very heavy rains beyond Kalyan. As a precautionary measure, we have suspended services from Kalyan to Karjat/Khopoli. Services on all other corridors of Central railway are running," Chief Public Relation Officer, Central Railway said.

Mumbai Police requested people not to venture in waterlogged areas and to maintain distance from the sea.

"City is expecting intermittent heavy showers all through the night. We request commuters to not venture in water-logged areas and also request you all to maintain distance from the sea. Please tweet to us or call on 100 in any emergency/need of help," said Mumbai Police.

"Due to the strengthening of monsoon currents and formation of low-pressure area over North West Bay of Bengal, rainfall intensity is very likely to increase over North Konkan during next 48 hours," IMD said.

The IMD had sounded an orange alert for Raigad, Ratnagiri and Sindhudurg districts of Maharashtra. An orange alert signifies that the authorities should get ready for necessary action.