He also said that Kashmiri youth can be reached also through social media campaigns in order to make them shun weapons and come to the mainstream. 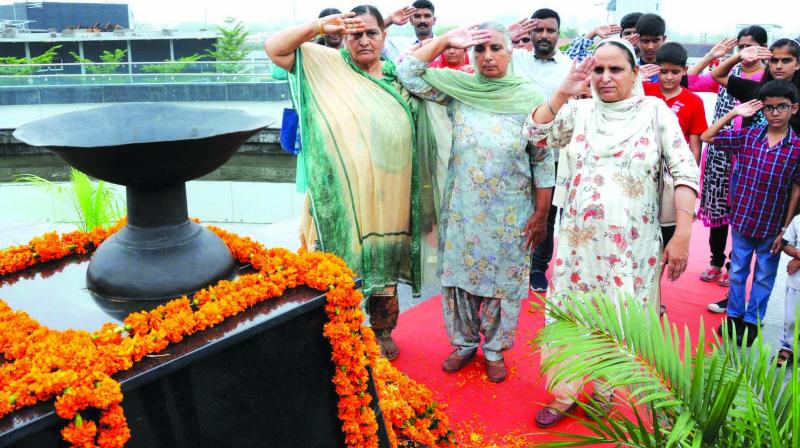 Relatives of Indian Army soldiers, who were martyred during the Kargil Way, pay homage at Punjab State War Heroes Memorial and Museum on the occasion of Kargil Vijay Divas in Amritsar. (Photo: PTI)

Srinagar: Army Chief General Bipin Rawat on Friday asked the Kashmiri youth to shun the path of violence and reiterated that their picking up the gun would not let them live long.

He, however, also said, “But this is not the end of everything. We are reaching out to the people to shun the gun and come over ground.”

He said that the Army is trying hard to motivate families of these “misguided” youth to persuade them to shun guns and come back to the mainstream. He added, “Apart from their parents we’re trying to motivate civil society giving them an opportunity to surrender.”

Gen. Rawat said that the Army has opened a number of goodwill schools in the restive state and taken various other measures to ensure the local youth pursue better careers and are not distracted by the gun.

“Let me tell you one thing. Not one person from Army goodwill schools has joined militancy and not one person has become a stone thrower. We are giving the right education that your future lies in educating yourself, finding a good job for yourself and looking after the family,” he said.

He also said that Kashmiri youth can be reached also through social media campaigns in order to make them shun weapons and come to the mainstream.

“We are trying to approach civil society, preachers, parents, and siblings of militants to make them understand,” he said urging the local youth to think of their parents who have dreamt of a better future for them.